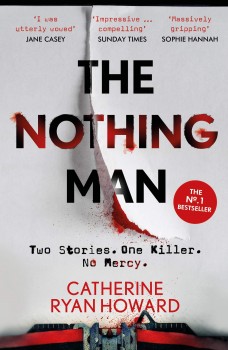 Eve Black and Jim Doyle are on a collision course for the second time in Eve’s life. But now it is Eve doing the hunting.

Eve Black was 12 and the only survivor when the serial attacker dubbed the Nothing Man annihilated her family in their Cork home. Now an adult, she has one obsession, one driving thought. She must identify the predator who so brutally took her sister and parents from her and left her empty, inside and out.

Supermarket security guard Jim Doyle is fatefully drawn inside the covers of the best seller, The Nothing Man, Eve’s true-crime memoir where she unravels her efforts to track down her family's killer. Jim’s fascination and anger grow in equal measures with each page he devours, because he is the Nothing Man.

Eve is clearly getting close to the truth. He understands her drive, her obsession. It is so like the passion he once had for his predatorial endeavours.

She won't give up until she finds him.

He must stop her first.

Eve and Jim share time on the page through alternating chapters. Eve through chapters from her book. Jim, through his reading of the book and gradual spiral away from his menial life towards the one he gave up nearly two decades before.

A book within a book is hard to pull off convincingly. There are areas where it works here, but the overall effect is a choppy story. Jim’s thoughts and reactions as he reads the book give an added dimension, but they are somewhat melodramatic rather than dramatic and not quite menacing enough.

This is not intended to be a whodunit. We find out The Nothing Man is 63 and leading an insipid, mediocre life. He is married but has an almost sneering antipathy for his wife. He works as a security guard but is not considered good at his job. The Nothing Man is a fitting description for this unremarkable person.

Unfortunately, Jim feels all too familiar. And indeed, he is, because he has so much in common with the real predator known as GSK (Golden State Killer), including his escalating crimes, his modus operandi, his job. The GSK was a one-off and the similarities between him and Jim are too many and too close to be coincidental. This detracted from my enjoyment of the book.

The author creates atmosphere through brief but strong description and there is a degree of suspense. However, there is also a fair amount of spoon-feeding the reader. I don’t need to have the obvious spelled out or tautology eating up page space and there are a lot of information dumps, particularly about the past, which, because it is long-since gone ends up unable to create emotion.

The dialogue could be sharper and less, “as-you-know-Fred.” And overall, even though Jim’s point of view is in the third person, there is too much tell and little show.

The present plot could have been amplified more to increase the suspense. The ending is good, particularly from Jim’s daughter’s perspective. I enjoyed the easy ride of this book and would certainly read more of Catherine Ryan Howard’s work.