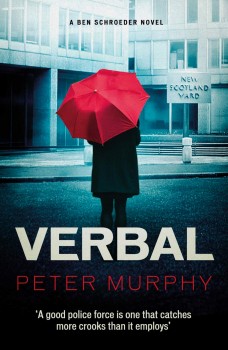 Barrister Ben Schroeder returns to defend a woman accused of warehousing drugs, and becomes mired in an international conspiracy that extends to the British police.

Peter Murphy has put his career in the law to good use, producing a long list of novels with a legal mainspring including the Walden series featuring a judge of that name, and seven starring barrister Ben Schroeder, of which Verbal is the latest. The first part of the book sets up the story for Schroeder’s defence of his client in court in the second part.

Imogen Lester is a Cambridge graduate working in the office of her solicitor boss and lover, Julia Cathermole. When news is received that Imogen’s parents have been murdered in Sarajevo the two visit to talk to police there. Julia’s contact with the security services reveals that Imogen’s father had been involved in action against an international crime ring and that the deaths were probably a consequence of that.

On the night of her return, the home that Isobel shares with her brother Damian is raided by the Metropolitan Police Drug Squad, who find a store of narcotics hidden in the basement. Damian admits that he has been acting as an ‘innkeeper’, storing the drugs for a man he knows only as Sean. The police find Imogen’s protestations of ignorance unconvincing and charge her with permitting premises to be used for supply of drugs.

The action is set in 1983, significant in that it takes place before the Police and Criminal Evidence Act 1984. Prior to that act, those arrested were liable to the police practice of ‘verballing’ suspects, shorthand for asserting in court an oral admission of guilt. The arresting officer, Mellor, falsely ascribes to Imogen various admissions and attitudes which, if accepted as genuine, would prove very damaging.

In this particular case, Imogen’s background tends to suggest that a confession along the lines of ‘You got me bang to rights, copper, I done it all’ would be unlikely, and Schroeder finds a novel way of demonstrating this is court. Nonetheless, Imogen’s acquittal is by no means assured and help is needed to ensure justice is obtained.

Luckily, new evidence becomes available. Whilst in Sarajevo, Imogen was introduced to Conrad Rainer, a man stranded in Yugoslavia after absconding from British police to avoid a murder charge. Rainer has information about a criminal gang with links to corrupt British police. It also generates a sub-plot whereby a friend who was instrumental in Rainer’s escape faces prosecution.

As usual, Murphy’s familiarity with the processes of the law gives court procedures a feeling of verisimilitude, and the comments about ‘verballing’ and other legal matters, both in the book and in the author’s end note, are interesting.