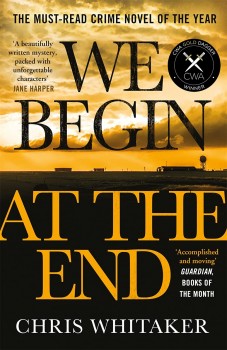 We Begin at the End

The release of a prisoner after 30 years precipitates a series of deaths and creates challenges for others.

Cape Haven is a small town on the California coast. Walker, or ‘Walk’ as he is known, is the single local policeman. As the book opens, his friend Vincent is being released from prison after 30 years, a stretch that began after his accidental killing of a young girl, Sissy Radley.

Sissy’s sister Star still lives in Cape Haven but dependence on alcohol and drugs impairs her ability to look after her children. The older of the two, Duchess, 15, cares for the younger, Robin, five, with a fierce insistence that belies her age. She fights for her mother too; when Star is assaulted at a club on the outskirts of town Duchess cycles out late at night and burns the place to the ground.

A few days later, the police are called to the Radley house at night where they find Star shot dead and Vincent covered in her blood. He is charged with her murder. Walk is convinced of his innocence but ill-equipped to prove it; he has neither the experience nor the combativeness called for, and worse he is in the advanced stages of Parkinson’s disease.

Walk is hampered in his efforts by Vincent’s refusal to speak; since his original crime he has been so preoccupied by guilt he will do nothing to help himself. Walk suspects club owner Darke of involvement, but there are plenty of others who coveted Star, particularly two neighbours who Walk has known all his life. Eventually he finds a way to help, but even then he realises the truth is still not properly understood.

Meanwhile, Duchess and Robin are shipped to Montana where Star’s father Hal runs a small farm. Although Duchess’ experience of unreliable adults makes her very hostile, the genuine goodwill of Hal and others in the neighbourhood suggest that the children’s future will be better than their past. However, Darke believes Duchess has something he wants, and she knows he will be coming for her.

Duchess is thrown on her own resources when Hal is no longer able to shelter her and her brother. The care system is ill-equipped to deal with someone so angry and prone to lash out, and the opportunity of resettlement is dashed. She takes off and makes her way back to Cape Haven determined to settle with the man she holds responsible for her family’s problems - Vincent.

I detect in Chris Whitaker a difficulty in restraining himself regarding the number of his characters, but his two key protagonists in this book are very engaging, especially Duchess. Anyone saddled with a name like that would have a right to be angry, and she comes across as understandably damaged but with a keen sense of right and wrong and a strong drive to achieve her goals.

The story is well handled and really enjoyable, falling into two sides on Star’s death which proceed in parallel until being brought together at the end, when secrets are revealed.