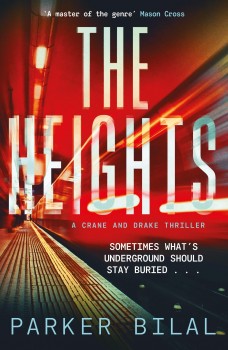 When a severed head falls out of a bag on the Tube, Cal Drake makes a connection to the case that led him to leave the police and become a private detective.

This is the second book in the series featuring Khalil Drake and Rayhana Crane, now partners in a new detective agency. Cal Drake has recently left the police under a cloud after the death of a witness he had taken under personal protection. Ray Crane is a forensic psychologist but with a range of skills beyond her professional training.

Drake’s witness ended up as a headless corpse washed up on a beach, and even after a period of years, when a head drops out of a bag on a London train, he makes a connection. The head appears to have been deep frozen for the intervening period. The witness was to have given evidence in a trial against a gangster long since gunned down in a car park, so why anyone should have retained the head and released it at this particular time is entirely obscure.

Drake still retains contact with DCs Kelly and Milo and to a limited extent has access to police resources, which enables him to establish who left the head on the train. He spends time living on the streets hoping to make contact, which proves to be dangerous. His old boss DCI Pryce remains convinced that Drake is in the pay of gangsters and is determined to find evidence.

Meanwhile, the agency has been approached by Marco Foulkes to find Howeida, a Kuwaiti postgrad student at LSE who has been missing for five months. Crane takes the lead, and starts by visiting her estranged father, whose decrepit mansion is located close to Foulkes’ home.

The background of both Crane and Drake is unusual and provides points of interest throughout. There are plenty of false leads and misleading signals in both cases, sufficient to send the detectives in wrong directions and from time to time putting them in danger, although the two protagonists remain cool at all times.

It is interesting to make comparison with Bilal’s Makana series, where the lead character is of an unfamiliar nationality operating mainly in countries where UK readers have plenty to learn about local life. In contrast, Crane and Drake are from minorities but are British and operating in Britain, so it is easier to make comparisons with other UK-based detectives.

London is, however, a city of immigrants, and the author exploits this to take readers into odd corners that natives will not perhaps know so well. The action is non-stop, with plenty of dark moments. Bilal’s picture of London and some of the more murky goings-on in the margins of society are fresh and make for an exhilarating read.