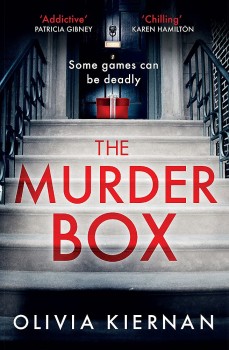 A police chief receives a murder mystery game, seemingly as a birthday present, but it soon becomes clear that the game is live and involves current day crimes.

Frankie Sheehan leads a senior crime team in Dublin.  On this occasion, her team investigates a missing person, Teddy Dolan, in a case the unit would not normally take on. But if the ‘misper’ is high profile, as well as related to the police chief, exceptions can be made.

Coincidentally, Neve Jameson walks into the same unit to report that her flatmate, Lydia Callin, is still missing after previous reports to her local police station achieved little. And, in a further coincidence, Frankie is the one called to the counter to deal with the inquiry. A chance comment made by Neve leads Frankie to believe the cases may be related.

Frankie then receives what she assumes to be a birthday present – a board game which appears to contain real-life clues, including an earring worn by the missing girl.

The board game is played online with a number of participants and employs augmented reality. There are advisers on these type of games and one, Camille Forbes, is consulted to provide advice to the team.  It would be easy for some readers – including this reviewer - to be intimidated by this unusual story ingredient, but its role in the plot is minimal and does not interfere with the flow, nor make things difficult to follow.

There are initially thought to be some 90 participants in the online game, but this is quite reasonably reduced to a handful after a little investigative work. Attempts are made to identify the links, if any, between them. All are following clues to see how things will play out and are under some form of mild police scrutiny.  They meet eventually to see if there can be an exchange of clues, even if reluctantly.

But, it must be said, Frankie’s team is not particularly proactive with its investigations and, at times, appears either somewhat incompetent or lacking in co-ordination. It is very late to quiz the players in the game and to bring to order a crucial witness who says: “I am not ready to speak to you yet.”

Tension does emerge at different points when, for instance, Frankie’s house becomes a target of a vicious attack, when a cut-off finger is sent to the team and when a bomb is tied to one of the players in the middle of a busy street.

Most won’t foresee the well-inserted twist that Kiernan delivers as the unit tries to join the pieces together.

The story is written mainly as a first-person account, although there are chapters delivered in the third person.

Generally speaking, the book is short on characterisations and we learn very little of Frankie, her team members and other colleagues. That said, a sequel is almost certain as a possible romantic interest for Frankie is hinted at. She is good friends with Baz, her closest colleague, but something in the background is brewing with him and he becomes somewhat withdrawn or secretive. Otherwise, it is all pretty dry as far as the characters are concerned.

Kiernan writes well and employs red herrings to good effect, but would do well to equip her police team with better skills. Put differently, few are likely to rave about the team’s sleuthing, a comment which also holds true for If Looks Could Kill, another in the same series.

Readers applying “means, motive, opportunity” tests may be disappointed with how the story unfolds, but those yearning for a twist they are unlikely to see coming, may find enough here to enjoy the ride.