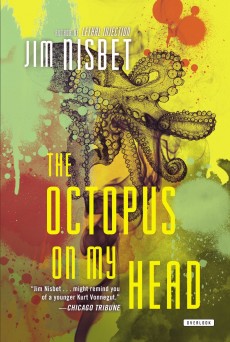 The Octopus On My Head

Curly Watkins plays guitar for a modest living, but is persuaded into a repossession job which turns out to have complications.

Curly Watkins, a man with an octopus tattooed on his head, is dedicated to his music. At least, he is invested in little else than a couple of guitars kept in a run-down rental on San Francisco’s Haight Street. Curly drops in on drummer Ivy Prewitt in the hope of persuading him to resume performing, but Ivy is a full-time drug addict these days. Curly fronts the cash to score some heroin, but a police bust follows: Curly is quickly released but Ivy is held for a prior offence.

Returning to his crib, Curly find Ivy’s ex, Lavinia, on his doorstep. Lavinia is a dope dealer and bad news, but somehow Curly ends up accompanying Lavinia on a project to raise the cash for Ivy’s bail. The job involves a repossession of some leased musical equipment on behalf of Sal ‘The King’ Kramer.  The delinquent payer, Stefan, has relocated: Curley manages to trick the new address out of his old landlord, but when they show up, Stefan turns out to be recently deceased. Curly’s unease about what this could mean is amply justified by subsequent events.

Jim Nisbet has had a long list of titles published, including several novels, and he has a very distinctive style. Laid-back, humorous, off-beat, odd, whatever you call it, there is nobody quite like him – recognisably American, with occasional touches reminiscent of Richard Brautigan or Elmore Leonard, but essentially unique. He clearly enjoys playing with words, and the best bits of dialogue sparkle. It is certainly ‘hip’, which makes it all the more unexpected when you find references to Thomas Grey’s Elegy Written in a Country Churchyard. The San Francisco/ Oakland setting comes through strongly, with the characteristic maritime mists and fogs adding a particular flavour.

Whether you will enjoy the story is doubtless a matter of taste. The extended digression into drug use and paraphernalia in the first sections of the book will not necessarily amuse, and it would flatter most of the characters to describe them as dubious. However, the tale maintains a light-hearted feel despite the use of serious narcotics, driving styles which abruptly terminate the lives of various dogs, and so on, until…. Well, without giving too much away, the last third of the book represents a significant change of pace with a character and events as chilling as you can find anywhere in crime fiction.

The Octopus on my Head will appeal to those who like an ‘alternative’ style as well as the gruesome end of the crime spectrum. But it is certainly different from the normal fare, and those who enjoy black humour will find plenty to keep them amused.