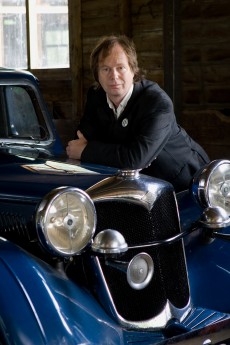 John Lawton was a producer/director in television for many years, mostly interpreting the US to the English, and occasionally vice versa. He has worked with Gore Vidal, Neil Simon, Scott Turow, Noam Chomsky, Fay Weldon, Harold Pinter and Kathy Acker. He's the author of the Inspector Troy series of thrillers.

He thinks he may well be the only TV director ever to be named in a Parliamentary Bill in the House of Lords as an offender against taste and balance—he has also been denounced from the pulpit in Mississippi as a communist, but thinks that less remarkable.

John spent most of the 1990s in New York—among other things attending the writers’ sessions at The Actors’ Studio under Norman Mailer. Since 2000 he has lived in the high, wet hills of Derbyshire, with frequent excursions into the high, dry hills of Arizona and Italy, as he finds he cannot write about England while he's in it.

He’s not sure he has any hobbies, but grows 12 different varieties of potato every year.  He is smartphone allergic and social media resistant. He has spent much of his life in search of the perfect hi-fi. He is devoted to the work of Franz Schubert, Cormac McCarthy, Art Tatum, and Barbara Gowdy.

Reviewed on 19 September 2020 by Chris Roberts

Frederick Troy, a member of the Metropolitan Police, forms an unlikely friendship with Guy Burgess, even though he is aware that he is probably a spy. Burgess's reappearance after his defection to the Soviet Union, puts Troy in danger.

Joe Wilderness is in a West Berlin jail after having unintentionally shot a woman whom he was trying to smuggle to the West. Just when it seems that he is going to be there for a long time, his father-in-law, a senior member of MI5, comes to his rescue - but it is at a price.

Reviewed on 26 November 2016 by Arnold Taylor