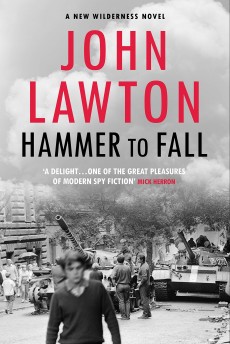 This is the third outing for Joe Holderness, known as Wilderness, set mostly in the 1960s when the Cold War was at its height. A brief opening section in post-war Berlin finds Wilderness trading stolen coffee with the Soviets, and we are introduced to his girlfriend Nell and to business partners within both allied and Russian forces.

Some 20 years later Wilderness is employed by MI6 as a field agent. The exchange of persons at Glienicke Bridge in Berlin which went seriously awry is still bringing Wilderness criticism from one MP in particular, and he is posted to get him out of sight.

He arrives in Finland, ostensibly as a cultural attache showing British films in small villages in the country, but he finds time for involvement in smuggling spirits to Russia. He also investigates some matters of interest regarding cobalt mining which have international dimensions.

His activities once again make it prudent that he be moved, and this time he is sent to Prague where dislike of Russian domination is becoming more overt. Nell is also in Prague, an emissary from Willy Brandt of Western Germany. The Czechs strike foreigners as charming, funny optimists, but as Nell observes, “on the inside they’re just waiting for the hammer to fall.”

Some of the young men of Prague who are vocal in their resistance become very vulnerable when Moscow sends in the tanks to crush the ‘Prague Spring.’ Nell’s attempt to protect one of them leads to disaster and Wilderness takes extraordinary steps to help, calling in all his credit with secret service operatives both at home and abroad.

Lawton casts his characters against real events during the Cold War, some of which now look distinctly improbable. Wilderness is irreverent and funny; he even has a Skoda joke I hadn’t heard before. The operation of MI6 and other agencies comes across as a lot less coherent than one is accustomed to from most other books about spies, which I suspect may well be realistic. The informality is probably not, although good fun.

What might be criticised is the reliance on the reader’s knowledge of events in the two earlier books in the series, something which was commented on unfavourably in the review here of the last book, The Unfortunate Englishman. It would certainly be desirable to read the books in sequence for full understanding of the various relationships; a new reader will find some matters difficult to follow.

The author acknowledges the influence of Gavin Lyall in the section set in Finland, particularly the inclusion of pilots, and I enjoyed the homage paid. Generally the writing flows very well, with short chapters tempting the reader to keep going, and it is easy to enjoy. I even forgave Lawton’s repeated use of ‘crepuscular’; there are some words that are so enjoyable to roll around the mouth it is difficult to resist.