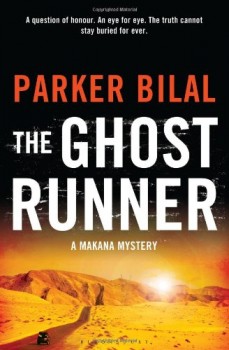 Egyptian Private Investigator Makana seeks answers to a dreadful murder by visiting the victim’s past in Siwa, an oasis town, but his arrival seems to trigger more deaths.

Former policeman Makana was ejected from his native Sudan when a subordinate took advantage of regime change to usurp his position and attack his family. Haunted by the death of his wife and the possibility of his daughter’s survival, Makana escapes to Egypt and by 2002 is living in Cairo and making a living as a PI.

A routine case of marital suspicion turns to something much more serious when a young girl is found badly burnt, and subsequently dies. The girl’s father has recently been the subject of ‘extraordinary rendition’ and returned to Egypt for interrogation, but there are rumours he is at large. Makana takes a trip to Siwa, an oasis town near the Libyan border, where the girl’s parents came from, hoping to find an explanation. But a series of further killings coincide with his arrival and the locals are very hostile.

This book – Makana’s third outing – is densely plotted. The history of his flight from Sudan is given episodically throughout the book; his enemy there is still threatening Makana from afar and this sets up the possibility of a future story. The missing daughter makes past events even more poignant and underpins his emotional connection with the murdered girl. The ‘extraordinary rendition’ episode with which the book begins is a further plot focus and source of mystery – if the man has been returned to Egypt as a suspected jihadist, then why has he been released, and what role do special security personnel and Americans play in events?

The book feels to be on more recognisable ground, however, with Makana’s arrival in Siwa. Here we have the familiar scenario of a backwater with hostile natives, who could enlighten the investigator but choose to keep him in the dark. When these start dying, the local police co-opt his skills, but stay close-mouthed and manifestly seek to manipulate Makana for their own purposes. Parker Bilal maintains a skilful balance between Makana’s determination to find answers, successive deaths, and the slow drip of revelations about past events in Siwa for an extended period, before the matter is resolved in a gripping finale.

Bilal’s depiction of Egyptian life is convincing, both in Cairo and in Siwa, and forms an interesting backdrop to the story. Siwa, an oasis town on the edge of the Sahara desert, is as exotic as many a science fiction setting, and even more so is Kalonsha, a fabled location out in the sands, where smugglers and criminals of every description gather to do business far from the eyes of any proper authority.

Makana is an engaging protagonist, an investigator with bravery, quick wits and the patience to listen and slowly sift the chaff in his unquenchable search for the truth.