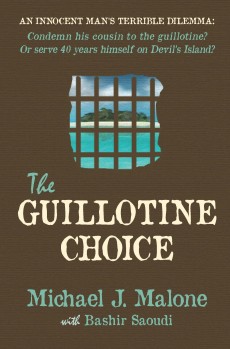 Mohand Saoudi, a 20-year-old Berber in French-dominated Algeria faces an impossible choice. Found with his dying French employer, he must name the killer or face a never-ending sentence in the dreaded Devil’s Island. Can he send a member of his own family to the guillotine?

Scottish poet Michael Malone has brought to dramatic life the story of Kaci Mohand Saoudi, an Algerian Berber, who endured more than 18 years of the living hell in the Devil’s Island penal colony in French Guinea for a crime he did not commit, rather than break his people’s age-old tradition and send a member of his own family to the guillotine.

This deeply disturbing, emotionally charged story was researched by Saoudi’s son, who shares the authors’ credit, and is an utterly astonishing and riveting account of an intelligent and proud man’s will to survive under the most unimaginably brutal circumstances.

In 1927, the 20-year-old Mohand had it all – a reasonably comfortably-off and happy extended family in the town of Maillot in the foothills of the Djuradjura mountains, a young bride who he is coming to love, and a new job with an enlightened and sympathetic French employer.

But the strains imposed by the harsh French colonisation – soon to explode into a horrific struggle for independence in which both sides committed the most barbaric atrocities as a matter of course – are beginning to tell. A cousin shoots his employer in a robbery and Mohand is found at the scene.

He faces an impossible choice. Break his tribe’s age-old tradition of family before all and condemn two cousins to death or face the rest of his life in one of the world’s most notorious prisons.

The French do not come out of this story well. Largely arrogant, acquisitive and exploitative colonists and ineffective, corrupt and brutal jailers – with some notable exceptions – they left both the Algerian people and their prisoners with little or no hope.

Saoudi chose to fight back with his intelligence, humanity and dignity – and it was this that earned him an early release and a return to his homeland where he continued to serve his people until his death in 1990 at the age of 83. His son is now petitioning the French government for a full pardon.

Malone’s dramatisation of these events is quite magnificent. His writing is effortless, expressive and taut. While he never shies away from the appalling conditions which Saoudi survived while so many others died, he somehow manages to convey a message of hope despite what is a relentless account of man’s inhumanity to his fellows.

This is no crime story, except in the widest sense of the word. It’s fiction only in that Malone has had to invent conversations and actions. It is really the story of a remarkable man and his burning will to survive anything life could throw at him.