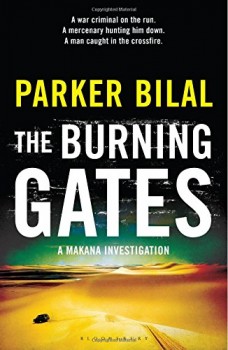 Investigator Makana is hired by a Cairo art dealer to find an Iraqi war criminal said to have treasures looted from Kuwait, but soon finds that several parties have an interest.

This is the fourth outing for Makana, a former Sudanese policeman who lost both his job and his family in political upheaval, and in 2004 is working as a private investigator in Cairo. Art dealer Kasabian employs him to find al-Samari, an Iraqi on USA’s most wanted list, who a visiting American claims is living locally and in possession of millions of dollars worth of looted art.

Using his contacts, Makana initiates enquiries, and is directed to a club where the rich of the city spend their time. His questions provoke a response and the interest of several powerful people becomes evident. By the time Kasabian is found murdered, Makana realises that his employment was merely intended to distract competitors with their eyes on the loot. Extricating himself in one piece may, however, not be so easy.

As in his previous adventures, Makana is convincing as a skilled investigator: brave, quick-thinking and persuasive, with an air of confidence that gains the trust of others. His intuitive leaps are sometimes challenging, but the trail always hangs together. Although the story is told in the third person, Makana’s thinking is on display for the reader. Never too far from the surface is his mourning for his wife and speculation on the survival of his daughter, which affects his sympathies whenever woman are involved in his work.

We find out more about the man from his contacts: Sindbad his driver, Okasha and Marwan from the police, the villainous Zafrani brothers, Sami and Rania from a news agency, and many others, each sketched with a delicacy which quickly establishes them as individuals.

The story is pitched against a background of successive American interventions in the Middle East, which through Bilal’s eyes are viewed in Egypt very cynically. If such beliefs are common throughout the Arab world, Bilal seems to suggest that the West would be well advised to tread lightly, even if action is well-intentioned. Such scepticism about motives is no doubt encouraged by the venial manipulation of resources in Egypt itself, which is well explored in the book. The smells, sights and sounds of Cairo permeate the tale and add to its verisimilitude.

Mekana’s investigations are fiction of a high order. The man himself comes across as a real character, and his fast footwork in a society not his own and where he is recognisably foreign is always interesting. The plots are credible but the workings are well wrapped-up, so the outcome is uncertain until the last few pages, and the finale suitably exciting.