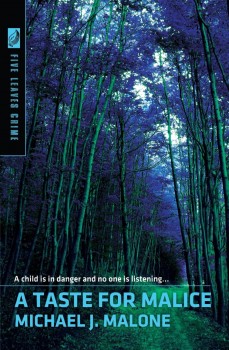 A Taste for Malice

Dysfunctional Glasgow DI Ray McBain gets involved in a case of child abuse by a woman who had been entrusted with their care.

Procedural is a very liberal description of dysfunctional Glasgow DI Ray McBain’s approach to police work. Guilt-ridden to the point of obsession from his own broken childhood, obsessed, impulsive and arrogant, he solves crimes by a mixture of intuition, stubbornness, luck, good ‘snouts’ and an occasional flash of pure detective brilliance.

Back on duty after his misadventures in Blood Tears and relegated to admin work by worried superiors who want to keep him out of the public eye while they assess his mental ability to continue in the job, McBain becomes involved in a very different kind of case through the efforts of his former team. The result is one of the more unusual detective novels – and a brilliant follow-up to Michael Malone’s first book. Murder, the staple of most, does feature, but is incidental and McBain’s involvement is only peripheral – though his informant’s tip proves critical. The central story, developed in parallel strands which converge, is a great deal less wholesome – and far more topical – child abuse.

The case he has been unofficially asked to help with deals with the harming of two children by a woman the family thought could be trusted to care for them. When a similar case appears, he sets out behind the backs of his senior officers to discover if they are linked. Parallel to McBain’s chaotic investigation runs the story of a family facing the mother’s loss of memory after an accident, and their befriending by a young woman. Suspicions build as the two strands come together in a dramatic conclusion with some genuine surprises.

The elements which made Blood Tears a compelling read are again here, effortless believable prose, characters you can feel for, and despite his flaws and often intense introspection lightened by downright bawdy humour, one of fiction’s more credible detectives. The book is far less violent but far more unsettling than Malone's debut, because it poses questions about how easily we trust strangers and subverts the conventional portrayal of sadists. Disturbing and emotionally charged, a must read for fans of psychological crime fiction, with its constant theme of moral ambiguity and saturated with guilt, despite the witty repartee – Malone must have learnt something from his time as a poet in a sex shop - this is a very dark book.

It is hardly a comfortable read, and perhaps especially disturbing for mothers with young children, but this well-constructed story fairly races along through the policing aspects, McBain’s fear that his nemesis from Blood Tears is stalking him and the insidious insinuation of the psychopath into their victims’ life. As a genre, I don’t like Scottish noir – it’s all too grim, surely there must be at least two decent, sober, non-violent people north of the border? – but with this clever tale Malone has raised the bar. The question is where does McBain go from here? I’ll certainly be waiting with interest.