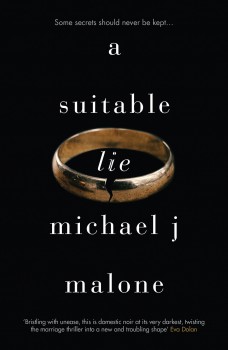 Andy, a widower and a single dad to a small boy, cannot believe his luck when he meets Anna, full of life and beauty. Their idyll seems complete until the wedding night when a visit to the hospital might be a clue that things could be far from perfect.

The death of his wife in childbirth has left Andy Boyd, a big tough Scotsman, in a sea of guilt and sadness. There is regret of lost life because they both had known Patricia’s health might suffer as a result of pregnancy but hoped for a happy result, against the wishes and advice of her parents.

Sorrow encompasses his life as a single father to a boisterous cheerful four-year-old Pat. Yet Andy is a fighter: his days are filled with work at the local bank, a very occasional rough game of rugby, and most importantly creating a happy and secure life for Pat. His mother and brother Jim provide a safety net thanks to their constant presence, sense of humour and abundance of love. When one evening Jim drags a reluctant Andy for a drink in a pub a truly magic encounter happens. Or so it seems.

Attractive, fun and spirited Anna instantly falls for Andy and little Pat, and their life suddenly becomes a fairy tale. Though realising that she’s an enigma and a complete stranger in a community where everyone knows everyone’s business, Andy’s desperate need for a new mum to Pat and his own attraction to this woman makes him rush to the church aisle. The spell isn’t broken on the wedding night when Andy ends up in a hospital, or later when his rare drinking session with Jim culminates in a brutal confrontation with Anna. The perfect new wife is no more.

The build-up of tension, unease and terror at home put enormous strain on Andy at work, yet he only cares about protecting Pat and now also the second small boy Ryan. He tries to do it in complete isolation from others. Bringing up two sons in a terrifying situation in a place that should be a safe haven rather than an unsettling battlefield is a matter of life and death. Literally. Emotional, physical and sexual violence changes perceptions and personalities. Murder becomes a very appealing option in a fight for survival.

I am not keen on the term ‘domestic noir’ so popular these days as it seems to narrow the understanding of the deeply troubling relationships close to heart, and their effect also on those outside the confines of home. But noir it is, at the dark pitch black and terrifying level.

A Suitable Lie is a moving poignant story about being human, about our need for love and a lack of it, and the deepest unsettling secrets that must be hidden regardless of cost. This psychological thriller will stay with you for a very long time, and not just because of the excellent storytelling. The masterful use of language brings shocking and disturbing truths. This is very sensitively portrayed, also by bringing a subplot involving Andy’s employee and friend whose actions implicate him in the theft at the bank, and a female colleague Sheila, a survivor of domestic abuse.

Michael J Malone has done an incredible job by combining a powerful emotional story and the detached commentary on the nature of secrets and their effects on people’s lives. He also questions what it takes to be a man and how to assert masculinity and its image in a world where certain established patterns govern men’s behaviour.