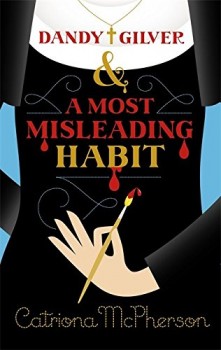 Dandy Gilver & A Most Misleading Habit

Dandy Gilver and Alec Osbourne investigate a case of arson at a convent in which a nun dies.

It is Christmas Eve 1932. On Lanark Moor in Scotland there is a break-out from the psychiatric hospital and later a fire at the nearby convent which kills one of the nuns. The main suspect is a patient at the hospital who happens to be a wartime pal of Alec Osbourne.

At the tail end of the winter the nuns appeal to Alec’s professional partner Dandy Gilver for help. Soon the duo is immersed in the trouble or “mischief” that has haunted the area since the fire. While Dandy concentrates on interviewing at the cloisters Alec tries to clear his friend’s name.

This variation on the country house murder is the 11th outing for Gilver and Osbourne. They are an amiable and clever pair of private detectives who have built their reputation on solving previous cases. The chemistry between them is akin to brother and sister. It is easy to picture our narrator Dandy Gilver through her voice, vocabulary and manner, all of which reflect inter-war English society. This is time when middle-class households employed staff, when people “climbed down out of the car” and rabbit pie was a staple of the dinner menu.

Alec Osbourne comes across as a likeable, practical chap with a sense of humour. The setting is atmospheric and the isolated location is ideal for a mystery adding a sense of menace and tension. The book gets off to an intriguing start and the ending is satisfying, but the middle section with the interviewing of so many witnesses is confusing and tedious at times. Even our detectives admit that just the questioning of the 18 Little Sisters of St Ultans is laborious. The overall effect is that the novel feels over-long despite the occasional punctuating incidents and some frantic activity.