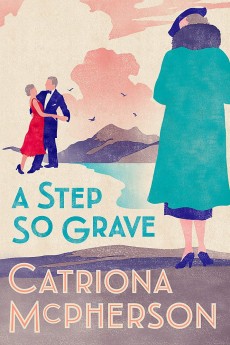 A Step So Grave

When Lady Lavinia Dunnoch is found murdered in the garden of her remote Highland home, detective Dandy Gilver, a guest at the house to discuss the marriage of her son to the victim’s daughter, is faced with a tangled web of lies, deceit and superstition.

One of the most endearing traits about Catriona McPherson’s writing is that for 15 years she has managed to produce a series of not-quite-so-cosy cosies at the laudable rate of at least one every year. Her Dandelion ‘Dandy’ Gilver series runs from the early 1920s through the 1930s and in part features the continuing struggle of Scotland’s privileged upper classes to maintain their position in a world changed beyond their recognition in the aftermath of the World War I and the Depression.

The very English Dandy, whose buttoned-up Scottish husband Hugh fought in that war, live in some style on her husband’s family’s estate in Perthshire, together with their sons. Their relationship seems typical of many at the time. Open expression of care of love are rarely expressed and the couple live almost separate lives, drawn together only for the sake of their boys and to meet family expectations.

Dandy has drifted unwittingly into the role of amateur detective and with her faithful colleague Alec Osborne has scored a series of major successes. She’s no Holmes, as she frequently gets simple things wrong, becomes distracted, or fails to say the right things. But this stumbling progress, beautifully depicted in some clever period prose, plus her own and others’ relationships, are what make these stories so charming.

In this latest outing, Dandy, family in tow, arrives in windswept Wester Ross to discuss the marriage of her son Donald to Mallory, daughter of Viscount Ross and Lavinia, Lady Dunnoch. Their visit coincides with the much-loved Lady Lavinia’s 50th birthday on Valentine’s Day.

In agreement with Hugh, an overly motherly Dandy believes the bride-to-be, at 30, to be far too old for her son up and sets out to break up the match. In any case, what upper class girl isn’t settled and bringing up a family by then is the basis of her argument.

But soon love and marriage is the last thing on Dandy’s mind as strange apparitions, superstitions and folklore among the Gaelic-speaking locals point to a death. War hero Viscount Ross, crippled and burned when saving the life of one of his own tenants, looks the most likely candidate. When Lady Lavinia is found brutally murdered in her famous knot garden, Dandy suspects that the tangled boughs and branches around Applecross House hide something much more earthly.

Everyone in the house, guests and staff, is suspect. Equally, everyone has their own idea of who was responsible and their own reasons for keeping the murder unsolved. As the local police settle for the easy option, Dandy and Osborne bumble towards the solution, more than once hampered by her personality that can get in the way of her being a better detective. And the story, with its touches of PG Wodehouse, Dorothy Sayers and Agatha Christie, becomes more and more tangled.

If there is a letdown, it is that the killer will stand out a mile for hardened fans. But McPherson’s clever and witty writing, plus some outstanding minor characters such as Dandy’s maid, the bright, modern-minded Cordelia Grant, who clearly has ideas far above her station and the personality and determination to make them happen, make this an absolute must for anyone who likes cosy historical mysteries.