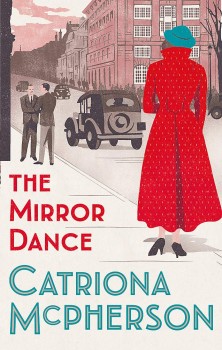 Aristocratic investigator Dandelion ‘Dandy’ Gilver and her partner Alec Osborne are asked to resolve a copyright dispute which plunges them into a murder investigation.

Catriona McPherson’s impeccably stylish Dandelion ‘Dandy’ Gilver, the aristocratic English wife of a once wealthy, Scottish landowner now struggling in the difficult interwar years – dash it all, things are so tight, they’ve had to let household staff go – brings her detective ability to the strange case of the murder of a travelling puppeteer, killed while perfuming in full view of a crowd in a Dundee park.

In this story, the 15th in the series and like the rest a standalone, private investigator Dandy and her charismatic partner Alec Osborne are asked to intervene in a copyright dispute. Their search takes them behind the scenes of both the publishing industry and the theatre, both in dire straits as they try to recover from the Depression, which had peaked in the summer of 1932, with 3.5 million unemployed and many more in only part-time employment.

The puppeteer is reported to have been using characters from a local publishing house’s children’s comic. But events take a much more serious turn in a murder that is both spectacular and shocking. As Dandy sits among families on deckchairs watching the Punch and Judy show in Dundee’s Dudhope Park on a bank holiday Monday, the puppets suddenly freeze – and the puppeteer is found slumped in his tent, his throat cut, with none of the audience having seen anyone enter or leave. As the police inspector charged with investigating the crime describes it, it is an impossible murder with an invisible assailant.

As always, the historical detail is convincing, with the mundanities of everyday life providing a solid background and adding real colour to the investigation. McPherson is a stickler for research and when the investigators need to find a newspaper from the day before, they naturally order fish and chips from Delnevo’s, a Dundee institution in the 1930s. Equally the puppeteer’s preference for the traditional, more sinister character of Scaramouche and the fact that the more modern trend for a crocodile and sausages has no place in his Punch and Judy show, has a key part to play in the story.

The settings are well done, particularly in terms of sensations such as smell, with a vivid evocation of the scents decking the struggling theatre’s backstage with its pungent odours of hair tonic and face paint. Naturally, there’s also an internal discussion on the etiquette of holding one’s nose – whether to pinch it or adopt the far more ladylike but less effective finger as a moustache technique!

Previous books have found Dandy in her more conventional settings of country house shooting weekends, aristocratic ballrooms and private estates, but this excursion into the middle classes and underbelly of Dundee is no less riveting, with sharp asides on social conditions – and above all, a real sense of wry humour.

The continued development of the character of the clever, ambitious, modern-minded lady’s maid Cordelia Grant, clearly determined to be as involved in investigations as in the alterations of her mistress’s wardrobe allow and with the personality and determination to make it happen, bodes well for future books.

As Dandy and Osborne stumble towards a solution, once again hampered by Dandy’s personality, which can all too easily get in the way, the story becomes more and more tangled, with McPherson’s talent for misdirection in evidence again. It’s this, together with the way she presents characters and how they cope with a fast-changing society while also depicting the ever-present class structures, that makes these not-quite-so-cosy cosies so readable.

If there is a let-down, it is that, as usual, the killer stands out a mile but despite that, McPherson spins yet another entertaining tale with some outstanding minor characters, a great historical background and a superbly ingenious denouement that comes to Dandy in that flash of inspiration I have now come to expect.