Two of our reviewers found some old friends this week. Arnold Taylor renewed his acquaintance with Georges Simenon in The Late Monsieur Gallet and welcomes Penguin's decision to reissue all 75 novels for a new generation. Sharon Wheeler, meanwhile, was blown away by Tartan Noir king William McIlvanney's incendiary reading of his own Laidlaw, which dates back to 1977 but is as fresh as ever.

On the long-running series front, The Shadow Collector by Kate Ellis is a tad heavy on what Linda Wilson calls the classic breakfast at Southfork method where the goings-on are recapped for those late to the party. But Linda says the plot twists make this addition to the series starring a black policeman and scruffy archaeologist worth reading. Sharon Wheeler joined Margaret Duffy's long-running thriller series late and liked Dark Side's no-nonsense lead characters – a novelist and her one-man army partner!

The prolific Nora Roberts finds favour with John Cleal – a man you wouldn't expect to be smitten by a romantic thriller! In The Witness, a young woman on the run tries to rebuild her life after witnessing a Mafia double murder. Sylvia Maughan says that Andrea Camilleri's The Treasure Hunt is a lively, if rather one-dimensional read as Inspector Montalbano finds himself shadowed by a student.

Sylvia Wilson was kept guessing by the small town story in Julia Keller's Bitter River, although she reckons you may need to suspend your disbelief with the terrorism angle which seems to pervade US crime fic.

Speaking of disbelief, Chris Roberts says dryly that some readers may find difficulty with Corban Addison's well-paced The Garden of Burning Sand - particularly those not convinced that Africa’s problems would be greatly alleviated by the acquisition of more American lawyers! Chris also wasn't convinced by the cast in Alafair Burke's If You Were Here, but says you can't fault her portrayal of New York's media, legal and police worlds.

Linda Wilson had two contrasting police procedurals this week. Oliver Harris's Deep Shelter goes underground – literally – with a cop hero who isn't exactly a poster boy for the Met. And she found herself reading Hurt, Brian McGilloway's bleak look at the underside of life in Northern Ireland, through her fingers. John Cleal faced a dark read with RJ Ellory's The Devil and the River, but says it's a beautifully written but harrowing study of mental disorder.

John was also busy on the historical beat this week. He was bemused at Paul Lawrence seemingly dumping a Derbyshire village in the flatlands of Essex, but says that otherwise Hearts of Darkness is a spy thriller with a vivid portrayal of plague-hit England. He then zipped over to New York where Lindsay Faye's Seven for a Secret portrays the new NYPD and the semi-legal world of slave catchers. John felt the author's caution with unpleasant historical facts stopped a good book from being potentially great. Meanwhile, Arnold Taylor says the reader is kept guessing in The Paris Winter, an absorbing novel by Imogen Robertson of a young woman's experiences in pre-World War I Paris.

Don't forget that we also cover young adult mysteries. This week Linda Wilson was impressed by Gina Blaxhill's portrayal of teenagers in way over their heads in Saving Silence where a young loner is injured in a mysterious hit and run accident.

We cornered Zoe Sharp, author of the Charlie Fox series, for this week's Countdown slot. And she's got impeccable taste when it comes to the six things she can't live without.

We'll back in a fortnight with 16 new reviews and an interview with a top author. In the meantime, we hope you'll visit our friends at Reviewing the Evidence and find out what’s happening on the other side of the Atlantic.
And if you're not following us on Twitter, find us at 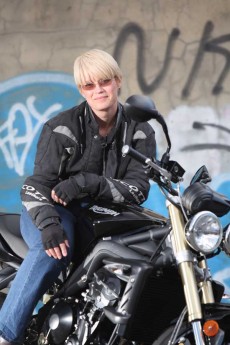 Zoë Sharp was born in Nottinghamshire, but spent her formative years on a catamaran off the north west of England, opting to be educated at home rather than school in her teens. In 1988 she made use of her passion for cars by becoming a freelance motoring writer, moving from that into photography. She is best known for her Charlie Fox series, two of which have been finalists for the Barry Award for Best British Crime Novel.

All work and no play makes Zoë a dull girl.

A set of police handcuffs
Jane’s Guns Recognition Guide
A blue elephant
Part of the tail fin from a Rapier missile (don’t ask)
My Kindle
An old copy of Chambers Dictionary with the pages covered in Post-It notes marking weird or interesting words
A framed four-leaf clover, given to me for luck
The spruce tree outside the study window where the red squirrels have built a drey
The much scribbled on first draft of the last book I was working on – Absence of Light: a Charlie Fox novella – which I have yet to recycle

Defrosted home-made chilli spooned into a couple of heated-up taco shells and covered in low-fat Greek yoghurt. No time to cook rice.