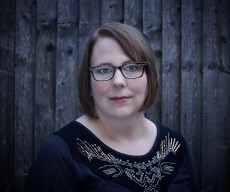 Teri Terry has lived in France, Canada, Australia and England at more addresses than she can count, acquiring four degrees, a selection of passports and an unusual name along the way.

Past careers have included scientist, lawyer, optometrist and, in England, various jobs in schools, libraries and an audiobook charity.

The footpaths and canal ways of the Buckinghamshire Chilterns where she now lives inspired much of the setting of her Slated trilogy. Teri is also the author of Mind Games and Book of Lies, and her most recent work is the Dark Matter trilogy.

It was all pretty random until I began to write.

A sleeping puppy, a cup of tea, a turquoise gel pen, a stack of notebooks, a fireplace, a teetering pile of books, oak floors, candles, light through stained glass.

Salad with toasted pine nuts, a boiled egg, and whatever else is in the fridge at the time (today that’d be hummus, olives, tomatoes). Or toast. Toast is always good.

Because it’s mission impossible to ever get us all in one place at the same time, my friends & co-bloggers on Notes from the Slushpile: Addy Farmer, Jo Wyton, Candy Gourlay, Kathryn Evans, Maureen Lynas, Nick Cross and Paula Harrison (notesfromtheslushpile.com).

My puppy, my husband, my friends, popcorn (the salty kind), tea and my notebook collection.

Imagination
Determination
No
The End

Thin Air by Michelle Paver
Town is by the Sea by Joanne Schwartz
The Complete Guide to Fasting by Jason Fung.

It’s all worth it.