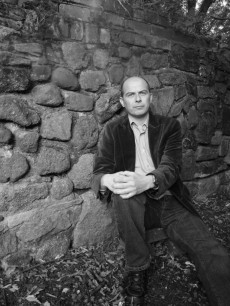 MP (Mark) Wright was born out of wedlock in Leicestershire in 1965 into a family farming home that can be traced back through seven generations and a well-documented lineage history of haemorrhoid suffering. His mother drank so heavily, that when she blew on his first birthday cake she lit the candles. The writer’s earliest memories is the clinging stench of pig shit permeating his nostrils and starting primary school in 1969 dressed in a hand-me-down uniform that consisted of a Tommy Tippy bib, romper-suit and his grandfather's bowler hat. (Young Mark was lucky – his sister Sally started two years later in a pith helmet, canary-yellow checked plus fours and spats). His family were so poor that MP was 17 before he found out that knives and forks weren't in fact, jewellery.

After leaving school (more like kicked out) he decided to pursue his first love, music, not as a musician, but in a wide variety of support roles within the music industry, touring with bands such as Tears for Fears, Duran Duran, U2 and Ultravox and unfortunately, Kajagoogoo before he stupidly became a private investigator. He quickly realised that excitement and adrenalin were not a good substitute for a proper career and a steady job, and in 1989 retrained in the mental health sector. His role was at the sharp end of an intense, often dangerous and threatening profession, but his learned and inherent ability meant that he was promoted into the probation service and eventually the Home Office, where he was responsible for offender risk assessments and mashing the tea in the staff room at HMP Gartree maximum security prison.

MP has retained his deep love of music, especially film scores, both modern and vintage. A 26-year member of the Campaign for R eal Ale, he is an aficionado of real ales and beer in general and has just discovered the pleasures of quality 15-year-old Scottish malt whisky which he drinks by the pint. He is the writer in residence at the Anchor Inn pub at Walton on the Wolds.

A huge fan of 1970s MOR singer Dana, MP has had a life-long association with the Nantwich-based Gentleman's Disciplinary Rubber Wear Review magazine where he is the editor-in-chief. He is also a nude life model for the Over 70s Twister Association. The author detests all forms of exercise, has never entered a gym and has had a life-long ambition to have smoked up to 70 Morland cigarettes a day and to have streaked at the Biggin Hill Air show whilst Raymond Baxter was commentating for BBC1. The writer is big in North Korea but shrinks in Iceland. This is probably due to the extreme cold and cheap underpants.

MP Wright has two daughters and lives with his wife Jen in the Leicestershire wilds with their large, flatulent Rottweiler dog Dylan The crime writer has never worn a truss, but openly admits to owning at least 36 toupees (some with chin-straps) and a Brian May wig that he often wears in the bath.

I could never cook a meal in eight minutes. I am an intolerable food snob. Fresh ingredients for every meal, organic veg box delivered on a Wednesday morning, herbs, a decent homemade stock, Elizabeth David and Julia Child are like gods to me … I rarely ever eat takeaways. Hate McDonald’s, Big Mucks, Whoppers and the likes. I adore a decent curry, hotter the better. I love to cook, it’s my one true hobby, in fact. Cajun, Creole, French, Caribbean cuisine. You name it I’ll cook it and Jen, my wife, will snuffle it down.

Malcolm Hardee, Keith Floyd, Richard Burton, Richard Harris, Oliver Reed, Dashiell Hammett and Raymond Chandler. Every one of them loved to pint or six. Proper imbibers of a decent tipple, swore like troopers and didn’t give a monkey’s who knew it. Just like me …

My wife, Jen.
My daughter’s, Enya and Neve.
My music collection.
A decent pub. (I can live without Greene King establishments and most Wetherspoons).
Good-quality toilet paper (Waitrose Cashmere is excellent).
My oldest, and dearest friend, Ken ‘Chin Chin!’ Hooper.

Brancaster.
Rhodes.
Any pub (except Greene King establishments and most Wethespoons).
The Bayous of Louisiana.

Oh, come on … just f*cking two! In our house we have a designated day called ‘No Rant Friday’, created by my wife because I rant so much. Now that bloody question made me start to sodding well rant.