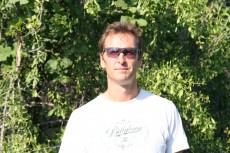 Canadian Paul E Hardisty is the author of the Claymore Straker series. He has spent 25 years working all over the world as an engineer, hydrologist and environmental scientist.

He has roughnecked on oil rigs in Texas, explored for gold in the Arctic, mapped geology in Eastern Turkey (where he was befriended by PKK rebels) and rehabilitated water wells in the wilds of Africa. He was in Ethiopia in 1991 as the Mengistu regime fell and was bumped from one of the last flights out of Addis Ababa by bureaucrats and their families fleeing the rebels. In 1993 he survived a bomb blast in a café in Sana’a.

Paul is a university professor and CEO of the Australian Institute of Marine Science (AIMS). He is also a sailor, a private pilot, keen outdoorsman and conservation volunteer, and lives in Western Australia.

Eggs on toast with mayo

Don't waste time. Any of it.