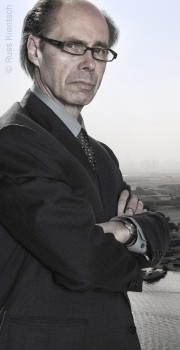 A former journalist, folksinger and attorney, Jeffery Deaver is an international bestselling author. He's the author of more than 35 novels, three collections of short stories and a nonfiction law book, and a lyricist of a country-western album, and has received or been shortlisted for dozens of awards around the world.

He was born outside Chicago and has a bachelor of journalism degree from the University of Missouri and a law degree from Fordham University.

His most recent Lincoln Rhyme novels are The Cutting Edge, The Burial Hour and The Steel Kiss. For the Kathryn Dance novel, XO, Jeffery wrote an album of country-western songs, available on iTunes and as a CD. Before that, he wrote Carte Blanche, a James Bond continuation novel, a number-one international bestseller.

And, yes, the rumours are true – he did appear as a corrupt reporter in his favourite soap opera, As the World Turns.

Spending every minute writing books thrilling and fun for readers.

The hotel room walls where I’m appearing at a writers’ convention.
The outline of the next book I’m working on.
The computer on which I am writing this.
The router that is connecting me online.
A cup of cold Starbucks coffee from breakfast.
A bottle of Crown Royal whiskey, unopened, as it is early afternoon (I have my standards).
A suitcase filled with one week’s worth of dirty clothes, as I’ve been on the road that long.
A flyer advertising the Mob Museum in Las Vegas, which I have just toured.
My broken prescription eyeglasses (sniff) and the bag of drug store reader glasses that will temporarily replace them.

So many options. Since it’s a cold winter’s day: Onion soup, made with Vidalia sweet onion, sliced tenderloin, beef stock flavoured with a dry sherry and thickened with a roux of butter and flower, topped with Swiss cheese. Steamed green beans. A rocket salad with feta. A baguette. A pinot noir from Burgundy.

Assume they can be living or dead:
John Kennedy, Barack Obama, Ian Fleming, JRR Tolkien, Sheryl Crow, Julia Child, Edward de Vere, the 17th of Oxford, who is a real ancestor of mine, according to family lore.

Writing.
Music.
Dogs.
Friends and family.
Wine.
Good bread and cheese (sorry, but they really are inseparable, don’t you think?)

Laguna Beach, California.
Cinque Terre, Italy
The Cotswolds.
Any small island off the coast of Maine, US

The Road to Jonestown by Jeff Gunn.
Fear by Bob Woodward.
Beneath A Scarlet Sky by Mark Sullivan.

Clerks who respond to a “thank you” with the phrase, “No problem.”