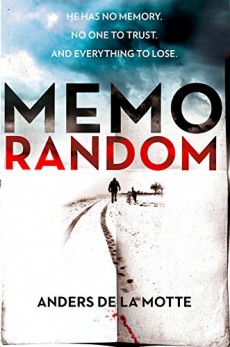 When police officer David Sarac awakes from a violent car accident in Stockholm he realises that everybody, including his friends and enemies, is searching for Janus, the informant he’s handling.

David Sarac wakes up in a hospital, following a car crash and, as he learns later, a massive stroke he had behind the wheel. He can’t remember anything except that he is a police officer, has done something unforgivable and extremely dangerous, and he needs to protect his informant, Janus.

Suffering from a severe memory loss and low self-esteem, Sarac begins a painful process of investigating himself. He slowly pieces together fragments of random smells, memories and hidden facts of his past as the informant handler at the Intelligence Unit of the Stockholm Police, with carte blanche to infiltrate the most dangerous members of organised crime. Sarac feels that he can only trust his straight-talking and efficient carer Natalie Aden; however, he has no idea that she is a medical student-turned- fraudster, recruited to investigate him and also look for Janus.

The young woman, desperate to wipe clean the slate full of her previous scams, will go to any length to find the truth suitable for her and for Oscar Wallin, closest ally to the new Minister of Justice, an unscrupulous lawyer Jesper Stenberg. Wallin is hired to remove any traces of Stenberg’s murder of his former mistress Sophie, daughter of his friend and former manager, the influential lawyer John Thorning.

Hot on their heels is Atif Kassab, the Iraqi police officer returning to Sweden to avenge the murder of his younger brother Adnan. Atif reluctantly reverts to his past as a notorious hitman and becomes involved in the gang war in search of the killer, only to be pushed towards the potential culprit Janus. But can he trust his former friends?
As the complex web tightens more people are found dead and David Sarac becomes convinced that he’s somehow responsible for their deaths…

So far so complicated. Countless twists and the intricate fast paced plot make MemoRandom very complex and apparently confusing. But prepare to be patient as this is a very clever device to keep the tension going and to constantly throw the questions of identity, truth and trust at the reader. Anders de la Motte creates a suffocating web of lies that tie together the criminal underworld, police force and top-level politics, culminating in a shocking and unexpected ending.

The code name of the wanted man Janus is taken from the mythical Roman god of transitions, war and peace. Janus, usually depicted with two faces, since he looks to the future and to the past, becomes a more sinister symbol here. Everybody can be bought for a price. MemoRandom’s theme of ‘All lies. Trust no one’ shows that no one is blameless as the main characters are just pawns in a deadly game of mistrust and corruption in this gripping thriller, which has a fine, energy-filled translation by Neil Smith.