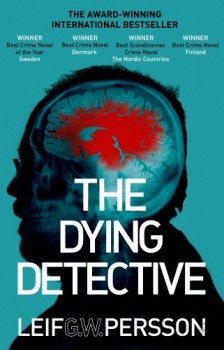 Following a stroke the retired Chief of the National Crime Police and the Swedish Security Service meets a neurologist who wants him to look into an old case. Twenty-five years ago a young Iranian girl was raped and killed, and the perpetrator never found.

Lars Martin Johansson, the 67-year-old retired chief of the National Crime Police and the Swedish Security Service, has suffered a stroke. It happened while he was sitting in his car and just about to eat a calorie-bomb hotdog with all the trimmings. Luckily he was seen by an alert police officer, son-in-law of a former colleague, and rushed to hospital. Soon news of the gun shot to his stomach (sauerkraut and ketchup on the shirt!) reached his wife Pia and some media. But in reality the stroke was considered ‘some sort of bastard bonus’ as Johansson described it after learning that high blood pressure and a weak heart are the main culprits of near-death experience, following a life of excess, which combined stress, work pressure, good food and fine wine.

So in this vein, punctuated by dark humour, discerning observations and occasional expletives, the story unfolds as Johansson becomes obsessed with an old unsolved case. Nine-year-old Yasmine was raped and killed in June 1985, and the window for prosecution expired just weeks earlier. The girl came to Sweden with her parents, Iranian political refugees, several years before.

In the hospital a chance encounter with the neurologist Ulrika Stenholm, a vicar’s daughter, provides an important piece of information about the case. Before Ulrika’s father died he had struggled with information given under the seal of the confessional and so he could not betray a parishioner who had known the murderer. But this knowledge tormented him. The murder of Yasmine had a devastating effect on her mother who eventually returned to Iran to seek solace in her faith, and also on her doctor father who moved to America, changed his name, and made a fortune hunting paedophiles.

Johansson starts the journey of physical and intellectual recovery. A man with a great heart, a good man ‘but an evil man was eating him from inside’. Famous and respected for his incredibly sharp mind he struggles with piecing together the vast amount of information yet his irrepressible police instinct keeps him going. He digs through all available paperwork. He enlists help of family members, two carers who become great allies, and his best friend Bo Jarnebring, a very thorough legendary detective who worked on the original investigation. He interviews various witnesses even though nobody wants to remember the painful past, especially as the unsuccessful conclusion 25 years ago was due to lack of evidence, the attitude of many police officers, and other stumbling blocks – one of them being the assassination of the Swedish prime minister Olof Palme, which meant that any possible resources were moved away from the search for the killer.

Leif GW Persson, the most renowned criminologist and a leading psychological profiler in Scandinavia, has written a detailed methodological novel. It isn’t just about a long-cold case. The author gives an analytical portrait of the fading policeman, of his mood swings, caustic sense of humour and frustration visible when Johansson says:  ‘My problem is that I can no longer see around corners.’ The Dying Detective, in Neil Smith’s flawless translation, is inquisitive, intelligent, and emotionally mature; a stunning piece of hard-bitten writing.