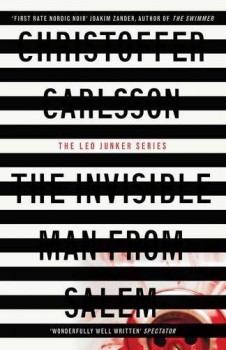 The Invisible Man From Salem

Disgraced police officer Leo Junker is first on the murder scene at his apartment block when a young woman is shot dead. But he’s shocked to discover her holding a familiar necklace. This event starts unravelling some strange connections to his youth.

Leo Junker is only 33 but already world weary: a bright policeman who was head-hunted to join the Internal Affairs division to spy on his colleagues. He became a scapegoat when a criminal investigation went seriously wrong. Now living on a mixture of tranquilisers and absinthe, traumatised and disgraced, he still hopes that he will again be able to rise from his humble beginnings.

When one summer night he is woken by flashing police lights he cannot resist sneaking his way into the ground-floor apartment in his building, which has been turned into a homeless shelter. The uniformed police at the crime scene don’t realise Leo is suspended and so he gets close to a dead woman, a prostitute with no belongings of her own. He is shocked to see her holding a familiar necklace.

That small piece of jewellery brings back agonising memories of things he had loved and lost, memories of friendship with John Grimberg ‘Grim’ and his younger sister Julia. At the time Leo was 16, Grim a year older, and neither of them really fitted within the dejected community. Leo had been bullied for years by two older boys and this slow spiral of violence and gloom escalated in the event that had changed everything for ever, especially his own and Grim’s lives.

Leo starts his own reckless search for the killer, though in the police’s eyes his status soon changes from a witness to a suspect, as his faint fingerprints are found on the necklace. Eventually his superiors reluctantly allow him to get involved in the investigation’s margins but it’s difficult to work out whether they trust him, or use him as a decoy. Leo isn’t sure himself and doesn’t divulge any information, as he slowly realises that his personal connection to the murder might have something to do with his past, especially as he starts receiving cryptic text messages from an invisible man.

It’s not easy to empathise with Leo Junker: conflicted, lonely, unlucky in love, self-absorbed, but the real interest for me was in the way social issues are portrayed in The Invisible Man from Salem. Two strands of the book, the investigation and the story of adolescence in Salem, work really well.

Carlsson paints a picture of modern Stockholm where the criminal underworld is never far away from the lawful official reality, as Junker tries to uncover the identity of murderer and potentially his own connection, and goes to shadowy places, backstreet businesses and rundown suburbs of the capital, as well as the yesteryear’s Salem, one of the satellite towns, where racial tensions and social deprivation affect everyone. Leo and Grim’s teenage years are painfully yet brilliantly depicted, and their cry for normality and ordinary secure love remains unheard. There seems to be no escape from misguided youth and crimes committed in the past; at least that’s what young men think.

This is a good solid and gripping thriller, translated by Michael Gallagher. Hopefully the next instalment in the series will show a slightly more grown-up Leo Junker.