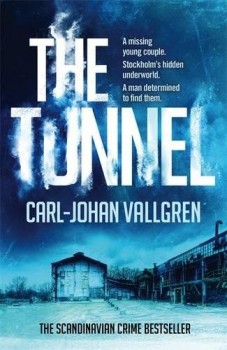 Unfortunately I have to begin with my annoyance at some of the blurb on the book’s cover: ‘Private investigator Danny Katz is trying to track down his former drug dealer. Ramón and his girlfriend Jenny have both vanished, leaving behind a lot of unanswered questions.’ Well … Chilean Ramón hasn’t vanished at all; he’s been found dead in his flat, after apparently overdosing on heroin, and then taken to the city’s mortuary. And Katz isn’t a private investigator as such as far as I can tell from following the story. He works as a super-bright freelance IT specialist and conducts a private investigation purely for his own personal reasons. The rest of the blurb is fine, and I don’t think the fault lies with the author Carl-Johan Vallgren or the translator Rachel Wilson-Broyles.

Back to the plot. Clean for over ten years, Katz, a loner, is trying to track down the killer of Ramón, Something doesn’t feel right about circumstances surrounding the death of his old acquaintance who used to supply him with heroin, and even a day earlier provided a fresh dose of the drug to tempt Katz back into the life of addition. He is also looking for the notorious Jenny and the answers to the main question: how did Ramón come into possession of a huge amount of money and near-industrial quantities of heroin, and who is his mysterious girlfriend.

Trawling through day shelters for homeless, dodgy flats, industrial estates, sex shops, and streets where prostitutes and junkies try to make a living, or rather just survive, Katz finds himself in dangerous situations and each step he takes becomes more risky. He gets in touch with his friend Eva Westin, also an ex-addict, a well-functioning lawyer and prosecutor in the Economic Crime Authority, working with cross-border economic crime, and now on a trail of mafia money made from narcotics and human trafficking trade from the Balkans being laundered in Sweden, and wary of possible corruption within the police force.

At the same time their Finnish friend Jorma Hedlund is in hiding, after an armed robbery went totally wrong, and his friend Zoran was executed by a masked man. Danny, Eva and Jorma share a painful past:  a stay at a youth home, abuse of heroin, gang involvement, brutality, and life on the streets. Carl-Johan Vallgren does the impossible as he creates these believable characters, especially an ex-junkie who’s full of contradictions: sympathetic and violent, ruthless and compassionate, and most of all able to take full responsibility for his actions.

The Tunnel, fast-paced and gripping, doesn’t shy away from very uncomfortable themes. In fact Katz stumbles into the horrifying revolting porn underworld where vulnerable women are being tortured and degraded, and he can hardly deal with the feelings of fury, anger and hopelessness. On top of this his old addiction threatens to take control of him. And so the book is so much more than searching for the sick ruthless baddies. It takes in addictions of all sorts, being hooked on substances and emotions, and what I found very interesting: the Jewish background of Katz, and his feeling of non-belonging in Swedish society.