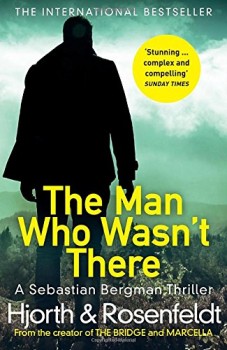 The Man Who Wasn't There

The long-buried bodies of six people are found in a mountain grave. The Criminal Investigation Department from Stockholm, including brilliant but arrogant profiler Sebastian Bergman, is called to the scene.

Two women’s hiking trip in the mountains is badly interrupted when they make a dreadful discovery off-route as they find the remains of six bodies in a shallow grave. Riksmord, the Criminal Investigation Department famous for their renowned homicide experts from Stockholm, is called to the scene. The painfully slow analysis of near-to-nothing evidence eventually reveals a Dutch couple reported missing in the autumn of 2003, nine years earlier.

However, the others, including two children, are impossible to identify as their clothes and teeth have been removed. The police can’t find any traces of a missing family, nor reasons for such an abhorrent treatment of the dead. Each small discovery is more alarming than previous, and the main team, led by excellent Chief Inspector Torkel Höglund, is struggling with the disturbing nature of the murders.

Höglund again calls in profiler Sebastian Bergman: “Hopeless but brilliant; with his arrogance, his egotism and his total lack of interest in his surroundings, he was a constant irritant.” For the psychologist / criminal profiler the trip to the mountains and a new case becomes an opportunity to finish an awkward relationship with his current highly-strung girlfriend, and also a chance to build ties with his daughter Vanja, a police officer hoping to soon leave for FBI training programme in the US.

The second plot involves Shibeka Khan, a strong Afghani woman, whose husband Hamid and his cousin Said disappeared in strange circumstances, also in 2003. After years of patience and quiet grief Shibeka has finally approached a television journalist to look into the story as she has had no help from the authorities. She hasn’t discuss this with her two teenage sons nor any male relatives but, eager to assimilate in Sweden, she feels that she needs some answers. It becomes apparent that something had happened and it’s been concealed by Säpo, the security police. Basically it’s not safe to dig deeper.

Recommending a book because of different TV series might be an unusual method but when you have two authors like Hjorth and Rosenfeldt on the cover of The Man Who Wasn’t There, then you wouldn’t be surprised. Michael Hjorth is one of Sweden’s best-known film and TV producers, and a screenwriter whose work includes several screenplays of Henning Mankell’s Wallander. Hans Rosenfeldt has hosted both radio and television shows, and is a top Swedish screenwriter and the creator of The Bridge, which is broadcast in more than 170 countries.

So the third instalment in series of Sebastian Bergman, translated by Marlaine Delargy, has this visual quality where you can imagine every single scene ready for the screen. Dynamics between the characters are well portrayed, with a lot of things left unsaid, hence more interesting. Bergman described by many as a ‘source of conflict’ could easily become a very unpleasant stereotypical anti-hero. However, the saving grace comes from learning about his deepest fears, and also from the fact that the authors kept exchanging ideas with the actor Rolf Lassgård who had portrayed Bergman. The collaboration provides the gripping narrative that keeps going strongly, and when all pieces of the shocking puzzle fall together it’s definitely worth your time and effort in trying to solve it.