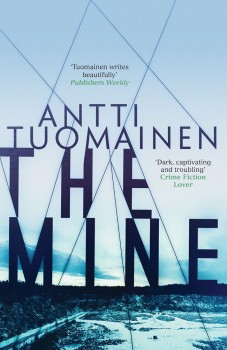 Investigative reporter Janne Vuori travels to the north of Finland to uncover the truth about an industrial corruption threatening lives and environment in the area by a nickel mine.

Investigative journalist Janne Vuori receives an intriguing email from an anonymous source, and travels to a small town in the northern Finland where a mining company has created an environmental disaster. Its illegal activities have caught the attention of eco-activists/warriors. Yet the official news outlets praise the project owned by Finn Mining Ltd, while ignoring too much support from cross-party politicians, and the fact that the site was bought for only two euros.

A trip to an extremely cold place called Suomalahti, notorious for its unhospitable rain and covered in snow and secrets, throws up more questions than answers when Janne arrives with a photographer to interview people who work at the nickel mine. He also sees some suspect activity on the perimeters of the mine, minimal employment for the locals and a new threat – the danger that threatens to destroy everything that he loves, and his own life.

As Janne struggles to uncover the truth about the company and the sudden deaths of its executives surrounded by mysterious circumstances, he realises that he’s being watched. The first man originally appeared during his trip to the north, the second is on his home turf in Helsinki, and although their presence seems more like figments of his imagination, both want him dead. This feeling is reinforced when Janne discovers that another controversial but brilliant reporter Kari Lehtinen lost his life when following the same story.

A meeting with Lehtinen’s daughter Maarit throws Janne further into personal and professional turmoil, especially after being allowed to read the dead reporter’s voluminous detailed notes. The fixation to get to the bottom of his own investigation into the industrial corruption takes over all his thinking waking hours. His work becomes him, and writing is a way of bringing order to the world: “Regardless of what else was happening in my life or in the world, when I was writing I was happy.” But Janne’s private life is falling apart, too. He seems to be failing as a partner to Pauliina, journalist-turned-consultant, and as a father to two-year-old Lia.

The second protagonist of The Mine is Emil, returning to Helsinki after a 30-year exile in Spain, to retire in his home town, to build emotional bridges and to finish his career as a highly efficient and headhunted hitman. His encounters with Janne add to the fragility of a very sad and painful story of a broken family.

Antti Tuomainen again creates a powerful book, set firmly within the boundaries of strong themes and unforgettable characters, with the huge dose of beautiful sensitive style, masterfully translated from Finnish by David Hackston. The pace of the story follows three parts named Nickel, Lead and Gold which give the reader the required structure to absorb the information, take a breather, slow down and reflect.
The agonising search for truth and understanding is present in Tuomainen’s previous novels, as well as the family leitmotif carried from Dark As My Heart.

Environmental issues aren’t reaching the full dystopian proportions of The Healer, but are not too far off if people ignore the signs of the impending doom. But the author never ventures into the preaching territory, instead delivers gripping, tense and mesmerizing novel. The Mine is full of exquisite little gems such as: “We don’t think rationally about the things we love.” The King of Helsinki Noir is a writer of life. I cannot wait to see his atmospheric work appearing on screen.