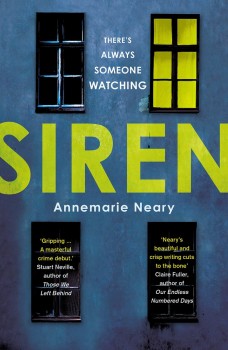 After 25 years in America, Roisin Burns is coming home to Ireland. And she’s planning to take down the man who dragged her down a dark path of death and destruction.

Roisin Burns has spent the last 25 years hiding out in New York, living, breathing and creating memories of herself as Sheen. But it is all a lie.

Brian Lonergan is a politician on the up; a caring man who wants the best for Ireland. But it is all a lie.

Now their paths are about to cross again, decades after Brian dragged Roisin down a dark path of death and destruction. This is not 1970s Belfast. This is not bombs or guns or soldiers. Lamb is a quiet island where the only police are probably there on holiday. This is not the dirty, violent world Roisin grew up in, but the consequences of her need for revenge and her desire for freedom will be just as deadly.

Even before I opened this book, I was certain there would be backstory from a point in history I grew up hearing, reading and seeing about from the safety of my family’s living room. I was looking forward to being taken on a journey through that period from an on-the-ground, intimate perspective. This book did not disappoint. Quite the opposite. Written in the third person present tense (2004) and in the third person past tense in the chapters devoted to Roisin as a teenager (late 1970s), I received a beautifully disguised history lesson of a taboo subject. What’s more, it is authentic and disturbing, because while the characters and events in Siren are fiction, this really happened. The author’s ability to twist the naivety of a 1970s teenager with the ruthlessness of her milieu and entourage captivated me.

Annemarie Neary’s writing style is simple and balances dialogue, introspection and description in such a way that the reader has a sense of time and place, from the brutal Belfast streets to the sparse and rugged Lamb island. Although the bulk of the book is about Roisin/Sheen, there are scenes dedicated to other characters, particularly Boyle and Theo, two of the island’s inhabitants. All the main characters are rounded and so flawed that the reader must speculate until the last pages who will have Roisin’s back and who will be sticking in the knife.

Although some of the questions raised through the story are only loosely answered by the end, I did not feel this was to the detriment of the story. Sometimes it is better to leave a little question-mark rather than have a misplaced, pantomime-esque reveal. I would like to have read more about Roisin’s 25 years in America; information is scant and brushed over. Perhaps the author felt it unnecessary to expand on that time period, but it would have possibly helped with understanding the protagonist’s obsession with bringing Lonergan down.

At the end, despite the protagonist’s moment of violence in self-defence, her realistic way of fulfilling her journey for revenge is a breath of fresh air in today’s appetite for the tough-girl-David-and Goliath routine. And by leaving the reader to decide what happened next rather than wrapping the story up with ribbons and bows was the right ending.

For a debut novel, Siren shows a confident author with a good voice and a keen sense of the importance of brief detail. This is a fast-paced, easy yet disturbing read that can easily be consumed in one sitting. This goes beyond beyond the superficial, and provides atypical rather than stereotyped characters. Siren is a must-read.