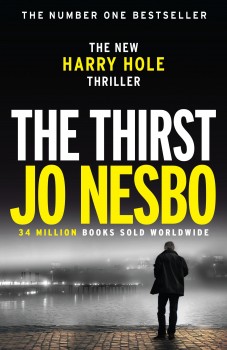 A woman is found dead after a Tinder date, and marks left on her body indicate that the killer used iron teeth to kill her, and then drink her blood. Oslo’s ex-detective Harry Hole reluctantly gets involved in a search for a vampirist.

Harry Hole “may well have been Crime Squad’s drunk, arrogant enfant terrible, someone who had directly or indirectly caused the deaths of other officers, and whose working methods were highly questionable … But he still had the same dour, almost frightening charisma, and his achievements were beyond question.” During his controversial career he has only failed to catch one person, but this fiasco has stayed firmly in his memory.

After the latest investigation it’s taken him three years to achieve some equilibrium and learn to feel content as he’s now married to Rakel, love of his life, and works as a hugely popular and sober lecturer at Police College. Oleg, Rakel’s son, who has survived a ‘heroin heaven and hell’ is a student there, eager to follow in Harry’s footsteps. Therefore, initially he has no intention of returning to the Crime Squad and becoming a part of investigation led by cool charismatic Detective Inspector Katrine Bratt. But then he learns the details.

In the background, Mikael Bellman, the corrupt Chief of Police manipulates situations and people to climb up the ladder into the position of a minister for justice. Constable Bernsten, his childhood crony, has no qualms about leaking information to the papers in return for money, and to slowly exact revenge. Mona Daa, journalist at VG, happily pays for information, and wants to be first when reporting this sensational case…

A woman was found in her own flat after a Tinder date that went wrong. The marks left on her body indicated that the killer was particularly vicious, using an iron set of teeth to cut her throat and drink blood. Initially the police are baffled by the murder but then a discovery of a second victim prompts them to reach for answers outside the standard circle of specialists. One possible theory of ‘the vampirist’ on the loose comes from Hallstein Smith, an expert on the subject, who is then brought as a profiler into the parallel investigation, managed by Harry, and plays a significant role in the unfolding of the story.

Harry, surrounded by people that equally love and hate him, soon realises that the killer might be the infamous Valentin Gjersten who had escaped from prison three years ago and then vanished into thin air, now wanting to hurt and take those close to him, just to show that he is in control. Yet killing for sexual pleasure and drinking human blood isn’t a new phenomenon as this deep psychological disorder has been recorded in the past. What differs is the use of the modern technology to lure victims.

The situation gets complicated as Rakel becomes very ill and stays in an induced coma in the hospital where one of the victims is recovering, and finds out that 15-year-old Aurora, daughter of his friend, has been raped by Gjersten. An abundance of strange evidence, setbacks and unbelievable theories push Harry to the edge, and the murder of a witness who recognises the killer, and a purchase of a bar, add to the drama.

The brutal violence targeted mostly at women is still there, as are darkness of soul and intricate office politics, and after reading all the books by this author I expected exactly that, and a touch more: the shocking turn of events culminating in a dramatic finale leaving plenty of room for Harry Hole’s possible return in the next novel. I hope so. For now, get your teeth into The Thirst (sorry, couldn’t resist!)