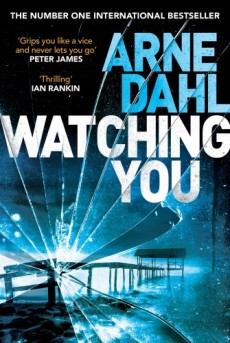 Detective Sam Berger is convinced that a third missing 15-year-old girl is in fact another victim of a serial killer. He’s forced to deal with his long-buried personal demons to understand and catch the murderer.

Detective Sam Berger is convinced that he has located 15-year-old Elen Savinger who has been missing for three weeks. Following an anonymous telephone tip-off, he has arranged a rapid response unit to storm a deserted house. However, instead of finding the teenager, the team discovers only traces of blood and signs that the place has witnessed torture while the whole crime scene permeates a strong sense of death. What’s more disturbing is that one of the men becomes a victim of flying knife blades from a well-constructed trap at the front door.

Berger’s boss Allan Gudmundsson can hardly contain his fury as he also doesn’t believe the serial killer theory and Berger’s explanations that Elen is the third girl from the area who might have already been murdered. Also, it seems that Berger is conducting a parallel investigation and so, unable to let go, he returns to the crime scene later at night.

As he chisels off layers of concrete in the basement rooms he feels that this place was a prison for two other missing 15-year-olds. He also finds a hidden clue: a tiny metal cog, almost invisible to the naked eye, like the ones he discovered on previous occasions.

Berger realises this must be a message for him, as he loves the mechanical watches, but is terrified to confront own memories from his school days when another boy shared his passion for clocks. Yet he’s the only who can comprehend the cryptic trail.

With help from a reluctant IT specialist who manages to identify the mysterious caller, a woman called Natalie Freden is eventually brought in for questioning. She was one of the onlookers at each crime scene. Very soon the interrogation and further follow-ups reveal new aspects of Freden’s personality and so Berger suddenly finds himself on the other side of the fence and becomes the accused. The Secret Service ask about minute details from his life, and he still doesn’t know whether he needs to dig deep into his embarrassing past to understand and eventually uncover the killer. And then there are the exquisite mechanical Swiss clocks and watches that could be a link to his badly bullied friend William Larsson.

The fascinating role-reversal makes the entire story full of questions and doubts, and neither Berger nor his secret agent and long-lost school friend Natalie Freden/Molly Blom trust each other but go on the run to save other missing girls. The recurring flashbacks to an abandoned boat house by a lake in the forest and to childhood cruelty are distressing and intense, and slowly add more information to the background of Berger, Freden and the man they both knew and who might be the killer.

Arne Dahl, the Swedish master of the gripping Intercrime novels, starts a new series with detective Sam Berger at the centre of investigation. In contrast to the earlier books, here the focus shifts from a well-oiled machine of a team to a maverick individual, bending rules and fighting his own demons, and reluctantly unearthing painful memories.

The literary qualities remain at the centre of the writing with deception and betrayal as key themes. Watching You in Neil Smith’s seamless translation is an excellent psychological study of a man haunted by decisions he made when he was a teenager. An intricate twisted plot, powered by complex and very strong visuals of past and present brutality, adds to the unsettling feel of the novel.