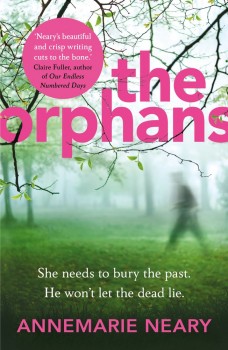 Two small children on a beach in North Goa wait for their parents to return. That was 25 year ago. They are still waiting.

1992, North Goa, India. Two small children, eight-year-old Jess and her little brother Sparrow (Ro) sit quietly on a beach for hours, awaiting their parents’ return. Their wait is in vain. Their parents have disappeared without a trace. Soon the newspapers christen Jess and Ro 'The orphans'.

Today. London. Jess Clark is a successful lawyer, a good wife, a devoted mother to little Ruby; she has buried her broken childhood. Only her husband, Charlie, knows the truth. Jess is at peace, or so she would make believe. But there is trouble in paradise, and it is about to destroy Jess’s fragile happiness.

Ro Considine has never settled. He drifts, living constantly in the past, chasing leads and sightings of his mother all over the world. Unlike Jess, he happily shares his story, especially if some attractive female happens along, particularly if it gets him a bed for the night. Ro is obsessed with finding out what happened that day. He becomes increasingly unpredictable, unable to distinguish fact from fiction. When new evidence comes to light, suggesting their mother Sophie may still be alive, and that Jess may know more than she is letting on, his tormented mind goes into freefall.

I was lucky enough to read Annemarie Neary’s debut novel, Sirens, and her confident voice impressed me. The Orphans is again a story tied to events from the distant past, but in a wholly different way from Neary’s first book.

Perhaps it is because I am a mother, perhaps it is the quality of writing, but to open with a mystery that oozes children’s grief pulls me in from the first pages, even though it is written in the third person, which I usually find distancing.

The two main characters, though siblings, could not be more disparate – so shockingly true to life, and something most parents ponder on when they look at their own children. The horror of their parents’ unexplained disappearance dictates Jess and Ro’s lives, but in opposing ways. Both believable, both sad, and both roles are played to perfection. Ro’s early ugly behaviour leaves only one possible outcome, but that does not take anything away from the story, it simply makes it realistic.

The dialogue is well treated; tight and character-specific. And the introspections and brief nods to body language bring the characters to life. While Ro’s behaviour is a study in deterioration from offensive to horrific, he is a person with whom one has empathy. His reasons are flawed, but utterly believable. Jess is a contradiction in terms. She is a lawyer and a doormat. Perhaps some would believe that an unlikely combination, but having met many highly educated and intelligent women who are totally subservient when they can’t hide behind their professional façade, I still found her character credible.

This is a mystery wrapped in a tragedy, and the author has given it a sense of time and place with brief, unobtrusive descriptions. There are intriguing subplots, and thanks to careful prose, the story moves forwards at a heady, suspenseful pace. I love the depth of emotion, the emphasis on guilt and absolution.

It is rare I have so little to say about a novel. Take it as an excellent sign. This is a book that I found stayed with me long after I read the last lines.