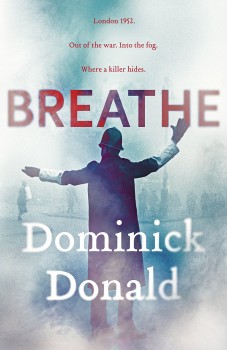 Dick Bourton is not like other probationer policemen. He makes connections his superiors don’t want to see, linking a series of deaths as the fogs of the 1952 winter stop the city in its tracks.

London, in the grim winter of 1952, is gripped by a steadily worsening series of smogs that bring the capital to a halt. In December alone, more than 3,000 extra deaths were reported as a direct result of inhaling air poisoned by pollution caused by coal smoke, factory and vehicle emissions.

The choking, dense fogs, so thick that policemen with lanterns were posted at road junctions like lighthouses, saw most businesses closed – and also provided cover for a sharp rise in crime, particularly street attacks by gangs of young thugs.

The reeking air also hid more serious crime. In the run-down Notting Dale terrace of Rillington Place, former petty criminal and war-time policeman-turned serial killer and necrophile – the Met failed to check his record – Reginald Christie was about to murder his eighth victim. One at least of the women, including his wife, was suffocated with a home-made ‘breathing device’ – a popular con-trick widely sold during the smogs.

This is the historical background to Donald’s gripping debut, a veritable doorstop of a novel and an extraordinary mix of fiction and fact so real it makes your skin creep. The beautifully detailed sights, sounds, grit and desperation of post-war London hang over every step into the poisonous mysteries of the fog.

His story is peopled with a rich variety of characters, many of them policeman, most of whom could easily have stepped straight out of a Dickens novel. Donald’s premise is simple. Could another killer have also taken advantage of what were ideal conditions? Take a sad, lonely and totally mad wartime Civil Defence rescue medic obsessed with the power he exercised when having to administer fatal morphine doses to those unable or too badly injured to be freed from blitzed homes.

Watching their ‘souls’ leave their bodies provides him with a quasi-religious and possibly sexual experience – a reference perhaps to Christie’s own sexual inadequacies – and blacked-out London offers him unparalleled access to many, mostly elderly people already suffering serious chest or lung infections. Hard-pressed doctors are unlikely to question extra deaths, and with no post-mortem examinations, are totally unaware of his depredations.

Into this fog of death steps probationer Cotswold farm boy PC Dick Bourton, obviously nicknamed Dick Barton after the hugely popular radio adventures Dick Barton Special Agent. Older than most would-be policemen, he is an ex-infantry sergeant with combat service in Europe and Korea, a cynical opinion of the officer class and a stunningly beautiful, but mysterious, White Russian wife who he met in Hong Kong and who has now joined him in England.

A strange coincidence leads Bourton to suspect first Christie then the multiple killer the police dub The Traveller. He begins to make connections his superiors don’t want to see, so pursues his own enquiries. When the Murder Squad takes an interest in Christie, he remains on the fringe of the case.

Christie flees – he was eventually held en route to America, the first arrest on board a ship at sea through the use of radio. But Bourton’s investigations have embarrassed senior officers and even put their jobs at risk. So the with usual British solution, the establishment ensures he is posted far enough away from any danger of his work coming to light – and The Traveller is quietly buried.

What makes Donald’s story so compelling is the combination of historical events and fictional characters to superb effect in a thriller plot with an aura of pervasive moral uncertainty.

He has the early 1950s off perfectly – unfortunately this reviewer remembers them – living conditions, social attitudes, police procedures, the early West Indian immigrants and that strange hard core of Eastern Europeans who had fled the Nazis or the later Communist occupiers. Breathe is an outstanding debut – one of the finest I’ve read in a long while.