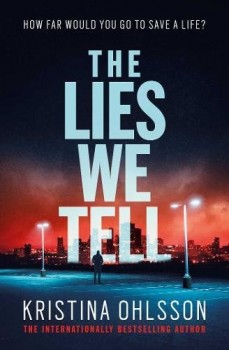 The Lies We Tell

Successful Swedish-American lawyer Martin Benner must prove the innocence of dead woman Sara Texas, accused of a string of murders in the US, while looking for her missing son Mio. At the same time he finds himself framed for crimes he didn’t commit.

The Lies We Tell follows Buried Lies, both translated by Neil Smith, and I feel that I should have started with the first instalment to understand the deep troubles the main character finds himself in. But Kristina Ohlsson provides enough glimpses into his background and offers a succinct summary of the backstory which adds flavour to the current set-up and to get the reader engaged in the tense cat-and-mouse chase.
Swedish-American criminal lawyer Martin Brenner is at the top of his game in Stockholm, especially after his successful stint working in Texas. But he isn’t the most appealing person: he’s arrogant, unscrupulous and a womaniser. He’s in an on-off relationship with Lucy, his legal partner, and they both look after his niece Belle whose parents had died. Martin’s plagued by nightmares which have roots in something terrible that he did years ago.
But there’s hope for some redemption as he is working on an apparently unsolvable case of a dead woman Sara Tell, also known as Texas, who is suspected of committing a string of murders. Sara lived in America but escaped back to Sweden when pregnant. After contacting Martin and asking for help, her brother Bobby had also died. This initial contact happened in the previous book. Additionally, Martin must find Sara’s four-year-old son Mio who has been missing for months. He has no choice but to follow the case he’s been dragged into, forced by Lucifer. The man hiding behind the name represents seriously devilish machinations as one of the most famous and feared mafia bosses in America.
Early on Martin reflects on his current situation: “I’ve been trying to get justice for a suspected serial killer. I’ve been accused of committing two murders myself. My daughter was kidnapped by a mafia boss known as Lucifer. Her grandparents have been murdered. And now I’m trying to find a missing child.” He doesn’t know whom to trust as false information keeps piling up and someone is definitely trying to frame him for murders that he didn’t commit.
Yet police claim that there’s evidence to charge him. The main detective Didrik seems particularly keen to catch Martin red-handed. An abundance of fake situations and red herrings put Martin on the road to hell. He’s unable to solve Sara’s and own problems, so travels back to Texas to search for Lucifer. The conclusion of the trip and realisation who has manipulated everything into the hellish nightmare is quite spectacular.

The entire story is told from Martin’s point of view which offers a one-sided experience of a man sinking in a sea of lies and half-truths. The lack of other perspectives creates a closing-in claustrophobia filled with lots of unanswered questions and monologues which may leave readers wondering whether Martin is worth all this attention.
Don’t be disheartened by the super-complicated story as it moves between events and people across the ocean that apparently have no connection with one another. Distant locations don’t seem to make sense at all, and Martin even mistrusts Lucy. However, there is a method in this creative madness to confuse the readers and the main character himself, leading to a very satisfying conclusion, brilliant in its simplicity.