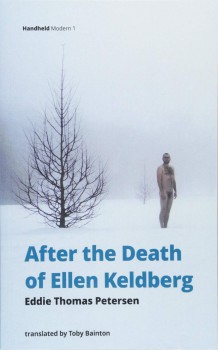 After the Death of Ellen Keldberg

The artist Ellen Keldberg has been found frozen on a street bench in Skagen. Soon two visitors arrive in town: her nephew Mikkel who has to organise a funeral, and Anne Sofie, a young reckless photographer obsessed with death. As their paths cross a history of old and new secrets come to the surface.

Coastal Skagen doesn’t exactly hibernate in January but it becomes a completely different slow-motion place. It’s a meeting point of two seas and where cosmopolitan and traditional attitudes fight against each other. In a stark contrast to summer months Denmark’s northern-most town, a haven for the artistic community and flocks of tourists, allows locals to breathe more freely, to recharge their batteries and to concentrate on surviving in the cold, dark and quiet.
When the ageing artist Ellen Keldberg is found frozen on a street bench after a night of heavy drinking, wearing only a dress and her coat missing, the shock is palpable but nobody voices the questions about her unexpected death, even though something doesn’t feel right. Very soon two young people arrive on the same train from Copenhagen. They seem to be somehow connected though they’re strangers.
Mikkel, a 23-year-old business student, has to organise the funeral of Ellen, his estranged aunt who was adopted as a small girl from Greenland into his rich Danish family. He hasn’t seen her for years since his confirmation, yet has fond memories and with a sense of duty he reluctantly deals with the practicalities as his parents are away on exotic holidays and don’t want to be involved in the inconvenient death. He’s confused about his own feelings as he evaluates people in his life, and discovers more than he bargained for and so must also deal with his own prejudices, masculinity and sense of responsibility. He encounters various characters who shed a bit of light on Ellen’s past, such as a caretaker, undertaker and local drunks.
The other visitor to wintery Skagen is a 20-year-old Anne Sofie, a budding photographer on a quest to have her work exhibited, and ruthlessly pursuing Knud Harber, a gallery owner, recommended by her politician father’s powerful friend. Anne Sofie spent summers in a family summer house in the town and has intimate knowledge of its inhabitants. She is obsessed with photographing death in various guises, lives through her art and will not stop until she finds the truth about Ellen.
This baffles Mikkel as their paths cross on the snowy pavements in the town. The tensions grow as she is determined to take photos of Ellen on her death bed, before a post-mortem is done, and he’s equally attracted and repelled by the unscrupulous head-strong Anne Sofie who in turn laughs at his sober middle-class bourgeoise existence. This shifting balance of emotions leads to another shocking event.
After the Death of Ellen Keldberg, translated by Tony Bainton, is Eddie Thomas Petersen’s first novel available in English. The author’s professional experience as a filmmaker finds its way into the excellent atmospheric portrait of the place and the people who inhabit it, and who have shaped the colourful life and personality of Ellen – Krille to her friends and the Parrot to her enemies – with her loud parties, drugs and drink, wild behaviour and a repeated story of adoption.
Petersen has created an interesting and surprising tale, with touches of macabre humour. It’s a slow-burner of a murder mystery that lingers in the reader’s mind for a long time, as much as blood on snow and the smell of freshly caught fish. Snow and darkness hide old painful secrets and new alliances promise the solving of mysteries and resolving of painful personal issues. Don’t expect fireworks and you will enjoy this subtle analysis of family relations.