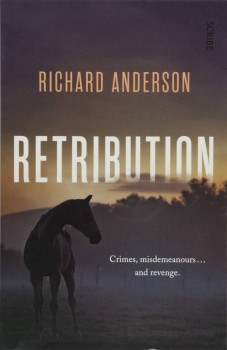 In a small farming town in Australia, a few discontented people are drawn together and tempted into taking retribution for wrongs done, real or imaginary.

Sweetapple is a man eking out a living in small-town Australia on the final parcel of land left after his parents lost the best of the farm they owned. To stay afloat, he rustles cattle. His neighbours are Bob and Caroline, a rich couple who bought part of the old Sweetapple land:  Caroline is a failed politician and Bob a sleazy businessman, whose interests include a share in a coal extraction operation in the district.

The coal plant is pestered by protesters who complain about environmental degradation and other aspects in operation of the plant. The activists live in a camp near the site; one of them, Luke, is in fact an agent paid by the company to spy on the others. As the book starts he is being paid off: he has little to report except for the theft of explosive from the plant, and his failure to discover who was responsible does not impress his employers.

The remaining key character in the drama is Carson, a girl that Sweetapple meets in the ‘Bowlo’. Carson is insufficiently motivated to gain qualifications but is sick of the limited opportunities available to her, and especially sick of the sexual advances from the older men in the district. Like Sweetapple and Luke, she is discontented and angry, and ready for any opportunity for payback.

Things come to a head over a horse, a thoroughbred named Retribution who Bob pays Sweetapple to steal. Sweetapple forms an almost mystical relationship with the horse, and when Bob’s financial interests demand a nasty fate for the animal, Sweetapple becomes obsessed with revenge. By chance the explosive stolen from the mine has come into his hands, and Carson and Luke are more than happy to join Sweetapple in planning an action which will satisfy the discontent of all three parties.

This is an unusual setting for a crime story and the author does a good job of building up the characters as the various elements of the plot come together. Sweetapple is the best-drawn, a man with feel for the land and animals, persuaded into something out of line with his best instincts. Caroline too is well delineated, a woman fighting back from failures in her political career and battling to retain self-respect in the face of her husband’s indifference.

Carson and Luke are also well fleshed-out; both are driven by a core of anger which provides tension and suggests problems ahead. Carson has a scheme to trap Bob by posing as a foreign woman looking for a ‘mentor’, but despite her love of mischief her future seems redeemable. Luke is a darker prospect and becomes increasingly unbalanced as the book drives to a conclusion. The author, however, leaves enough doubt about how things will play out to ensure the reader remains uncertain until the final pages.