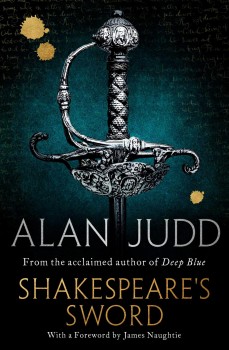 Antiques dealer Simon Gold discovers an ancient sword which may have belonged to William Shakespeare and becomes obsessed with owning it. But how far is he prepared to go to get it?

Readers may know Alan Judd’s name from his espionage series featuring former Army officer-turned MI6 agent Charles Thoroughgood and his eventual rise to head the country’s overseas intelligence agency. Up-to-the-moment plots have dealt with cyber attacks, political extremism and the background to his latest is the chaos created by Britain’s intended exit from the European Union.

Simon Gold is a moderately successful antiques dealer with an old established family business in a quaint Sussex town. He lives with his sister, who has learning difficulties, but who is happy to act as his occasionally eccentric housekeeper.

A brief encounter with a rich, but tasteless, local customer and his attractive wife leads to Simon visiting their home, packed with valuable family heirlooms. An ancient rapier possibly dating to the early 17th century, now used as a poker, catches his eye and he wonders if there could possibly be a connection between the man’s name – Coombs – and the mysterious six-word bequest in William Shakespeare’s will: ‘To Mr Thomas Combe my sword.’

Were it possible to prove such a connection, the weapon would be both iconic and extremely valuable. The more Simon investigates, the more obsessed he becomes – at the same time becoming ever more physically attracted to Charlotte Coombs, who is giving him signals that she is disaffected with her husband and welcomes his attention.

As he builds a case that this may indeed be Shakespeare’s sword, his desire to possess it becomes an obsession – and Gold, basically a nice, run of the mill, middle-class businessman, begins to face his own demons as he asks himself how far he is prepared to go to own it.

Judd writes beautifully, occasionally entertaining with clever, even quirky, prose. But this stunningly predictable story, with its even more predictable denouement is, quite frankly, both insufferably middle class and pretentious.

As a cure for insomnia, this is a real winner! Most Judd fans will be far happier when he gets back to Thoroughgood’s battle against Britain’s enemies.