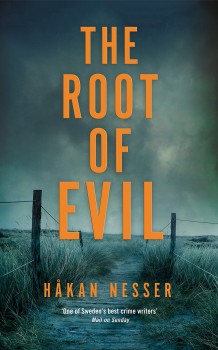 The Root of Evil

Detective Inspector Gunnar Barbarotti receives a letter informing him that a murder will take place in his small Swedish town. And indeed, a man is soon found dead. When more letters arrive, he and his team must try to prevent more deaths.

As Detective Inspector Gunnar Barbarotti prepares to leave for a relaxing holiday in rural Gotland, he receives a letter sent to his home address stating that a murder is about to take place in his own quiet town of Kymlinge. Erik Bergman will be killed. Initially Barbarotti doesn’t want to treat the threat seriously but feeling responsible he eventually cuts his holiday short and returns to work. Some precautions are taken, but the man is indeed found dead.
Soon a second letter arrives, then a third and a fourth, and the police realise that the killer has involved them in an especially cruel cat-and-mouse game where only the name of the next victim is given but any other information is lacking. There’s no reasons for the murders, no apparent connections between people and complete guesswork as to who might be sending the letters.
As the investigation progresses painfully slowly and without any tangible results – apart from more bodies that is – the reader becomes a party to a secret diary detailing an eventful vacation in France five years earlier. Six Swedish adults, who have met by chance, decide to spend time together, eating, drinking and lazing on the beach where they also encounter Troaë, a precocious 13-year-old girl, who is staying in the area with her grandmother and enjoying her freedom.
The dynamics within the group shift as two couples plus Erik and the mysterious diary writer become fascinated by Troaë. The girl first wants to paint a portrait of the Swedes and then joins them on a sailing trip which ends tragically. Her accidental death starts a blame game as nobody wants to take responsibility for what has happened and to deal with the consequences. What’s more, they think that the girl’s unusual name means ‘the root of all devil’ which apparently explains the Swedes’ actions and then ties with the motive for the killings.
Barbarotti is in in charge of the investigation, working closely with his partner, a very intelligent sharp Eva Backman, and reinforcements from Gothenburg and the National CID. He appears to be a very likeable character, working methodically and going through ordinary emotions, as well as struggling with feelings of inadequacy when facing this thoroughly puzzling and illogical case.
He is also feeling lonely after his daughter Sara moved out and went to London, as well as sensing that he is losing his two young sons who have moved with their mother to Denmark, and missing his girlfriend Marianne to whom he has just proposed. On top of this he often converses with Our Lord, trying to work out whether God really exists. He knows that evil does. This adds a different dimension to the police work, even if these conversations are kept private.
As always Håkan Nesser creates a very complex story, full of unexpected moments, and themes of guilt and betrayal are intertwined within the plot. His trademark sharp observations, philosophical musings and dry humour are present. Occasionally it seems like he might be dwelling too much on some existential issues, especially when Barbarotti tries to work out his next step, and also when the diary author and the supposed murderer examines all events leading to his decision to dispose of all those responsible for what has happened years before.
However, The Root of Evil, in a brilliant translation by Sarah Death, is a gripping and compassionate novel, a welcome follow-up to The Darkest Day, and whets te appetite for more Barbarotti books which should have been available to the English readers much earlier.