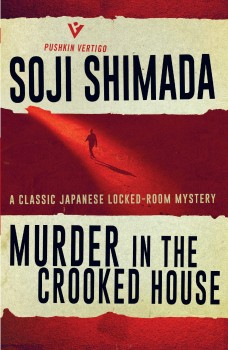 Murder in the Crooked House

In a strange house built at the isolated northern tip of Japan, guests who’ve gathered for New Year start dying. Renowned detective Kiyosi Mitarai is called in to find out why.

This is the second work by Soji Shimada re-issued by Pushkin Vertigo, a book first published in Japan in 1982. As with the first, The Tokyo Zodiac Murders, the author sets up a complex and bizarre series of deaths, creating a puzzle which the reader is invited to solve. To assist those who fail to do so, the unorthodox detective Mitarai is introduced to explain events in the final chapters.

The setting is Ice Floe Mansion, a weird house built on the most northerly point of the Japanese mainland by a rich industrialist, Hamamoto. The house leans some five or six degrees to the vertical, as does the adjoining tower, a copy of the Leaning Tower of Pisa but with an exterior faced in glass. The interior of the house is equally strange, with metal stairs in inconvenient places and odd openings in the walls.

Hamamoto has invited business partners and underlings to his house for a holiday break while the snow falls outside, to sample gourmet food and view his collection of automata and dolls. Soon, however, they begin to die. Death comes in the form of a large hunting knife, but strangely each victim is found alone in a locked room.

Local police call in a senior man from Tokyo, but the presence of several officers in the house does not prevent further deaths. Police HQ send Mitarai, who has a reputation for solving such cases. He appears to suffer a set-back when a further guest dies, but eventually gathers those who remain to explain what has been going on and to unmask the culprit.

It is probably no coincidence that the house party feels a little like something devised by Agatha Christie, with petty frictions under the social facade. We find out that some of the lower-ranked guests resent the bowing and scraping they have to perform, and there are competitive disputes between others. It is difficult, however, to keep track of the cast, despite a full dramatis personae being given.

There is little attempt, in short, to dress up the main event which is of course the puzzle. On this I wouldn’t want to give anything away, but the strange nature of the house and its contents provide a pretty clear pointer.

The final reveal left me feeling that the various parts of the enigma had been satisfactorily explained, but that the culprit could have taken a far simpler route to obtain his (or her) ends, and that his (or her) machinations were ridiculously over-complicated. But the tale may appeal to enthusiasts of the locked-room mystery and lovers of the bizarre.