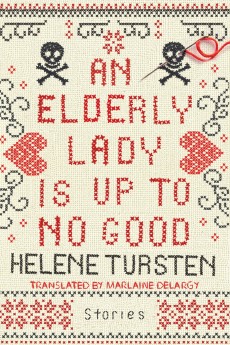 An Elderley Lady is Up to No Good

Maud is nearly 90 years old and lives rent-free in a spacious apartment in Gothenburg. She might be old and seemingly confused but will not allow anyone to upset her peace and quiet.

Maud is an irascible 88-year-old Swedish woman with no family, no friends, and… no qualms about a little murder. This funny, irreverent story collection by Helene Tursten, author of the Irene Huss investigations, features two-never-before translated stories that will keep you laughing all the way to the retirement home.

Ever since her darling father’s untimely death when she was only eighteen, Maud has lived in the family’s spacious apartment in downtown Gothenburg rent-free, thanks to a minor clause in a hastily negotiated contract. That was how Maud learned that good things can come from tragedy. Now in her late eighties, Maud contents herself with traveling the world and surfing the net from the comfort of her father’s ancient armchair. It’s a solitary existence, and she likes it that way.

Over the course of her adventures—or misadventures—this little bold lady will handle a crisis with a local celebrity who has her eyes on Maud’s apartment, foil the engagement of her long-ago lover, and dispose of some pesky neighbors. But when the local authorities are called to investigate a dead body found in Maud’s apartment, will Maud finally become a suspect?With a catching and intriguing title An Elderly Lady is Up to No Good by Helene Tursten presents a collection of five short stories which demonstrate that if you want to preserve the particular way you live then nothing will prevent you from achieving your goal.
Dark and funny snapshots show how the gentle but resourceful 88-year-old Maud deals with big and small irritations. She has lived in the family’s expansive apartment in downtown Gothenburg rent-free, thanks to a clever clause in a contract which luckily cannot be amended. This happened when she was 18 and her father had died suddenly, leaving all matters in a serious financial mess, apart from one apartment block. His heartbroken wife soon followed suit and Maud had no choice but to care for her older and mentally-ill sister Charlotte.
The next major family life event was Charlotte falling down a steep internal staircase years later. This allowed Maud to finally change her mundane existence as a carer and a teacher, start living her own life, and spend her pension on some small luxuries and travelling the world. She is alone but happy with solitary existence.
Maud is extremely satisfied with the living arrangements and surfs the net like a pro to keeps tabs on what’s going on. Sometimes it might take her a while to work out what’s happening in the nearest environment. For example, a new neighbour, a vivacious celebrity and artist creating bold phallic sculptures, is after her own flat. When the old lady realises that Jasmin’s little gifts and sloppy hugs are just a method to get into her good books, then of course she decides to dispose of the potential problem, with hilarious consequences.
Maud also dispenses justice when it comes to an abusive husband or a gold-digger after the man she had hoped to marry decades ago. She does it without being suspected, and her camouflage skills are remarkable.
The slim volume describes four misadventures which culminate in death; and the last event is told from two perspectives – one of an elderly gentleman living in the same building, the other from Maud’s point of view. Detective Inspectors Irene Huss and Embla Nyström, characters from Tursten’s other books, are called in to investigate a dead body found in Maud’s flat. The case is eventually shelved but that doesn’t stop police having doubts regarding Maud’s apparent confusion, forgetfulness and general shock at seeing a dead antique dealer in her father’s well-preserved museum-like room.
The author Helene Tursten was a nurse and a dentist before she embarked on her writing career which produced two series of books, dealing with fairly serious themes. Here she gives a masterclass in concise and sharp characterisation. Marlaine Delargy translated this little entertaining gem from Swedish, and it feels like she really had fun doing so.