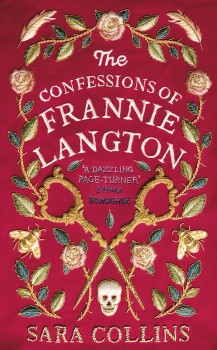 The Confessions of Frannie Langton

Maid Frannie Langton tells the story of her life from a slave on a Jamaican sugar plantation to her trial where she’s accused of murdering her English employers.

Slave narratives usually try to inform white readers about the suffering of the enslaved slaves and stress the abolitionist cause. That will tell you what happened to someone, but not much about who they were.

Early black chroniclers spent much of their energy addressing their problems. Even modern writers fall into the same trap, reducing characters to mere stereotypes from whom no one expects anything other than suffering. But unless those characters reflect humanity in all its forms, the writer risks doubly dehumanising them.

There is no danger of that in Jamaican-born LSE graduate and lawyer Sara Collins’ remarkable and searing debut. This brilliantly Gothic book is set against a background of early late Georgian Jamaica and London.

This is a caustic exposure of the hypocrisy of Britain’s monied and intellectual classes and the ignorance and fear-inspired race hatred of the lower orders. This superb page-turner is furious and tender by turns. Frannie may be a fictional 19th century character, but she can also be seen as very much a heroine of our times.

This bold, powerful and dazzlingly original story is told throughout in the first person by Frances ‘Frannie’ Langton, a tough, fiery and vividly alive mixed race slave girl, born on a Jamaican sugar plantation.

Now on trial at the Old Bailey for the murder of her English employers, this singular and quite unforgettable woman, sometime slave, maid, whore and seductress, relives her life as she attempts to give her defence counsel some thin hope of saving it.

It begins with a girl learning to read on a plantation run by her white and unshakeably white supremacist father in Jamaica and ends in a grand house in London. She has been educated in order to record the hideous anatomical experiments her master/father has carried out on the other slaves to ‘prove’ his racial theories.

These memories haunt her when she travels to a cold, damp and depressing London with him and is ‘gifted’ to work in the house of his one-time colleague, the eminent natural philosopher, George Bentham, said to be “the finest mind in all of England”, but in fact a patriarchal, bigoted and narrow man.

Frannie is bullied by a tyrannical and smallpox-scarred housekeeper, and the only thing that brightens her life is a blossoming relationship and eventual love affair with her laudanum-addicted mistress, the French-born Madame Bentham. Her narrative is interspersed with extracts from the court case, and the reader begins to piece together slowly what has happened – but Collins certainly keeps you dangling.

Characterisation is rich and gutsy with some strongly developed minor roles and the pace of Frannie’s narration is generally good although it dips a little in the early London sequences when her developing relationship with Marguerite Bentham takes the prominent role.

This haunting tale of a woman’s fight to understand and tell her ultimately tragic story is beautifully written. It’s also lush, gritty, wry, gothic and compulsive, psychological savvy and inspired by a righteous wrath.

Collins’ book is intelligent, with an unsentimental analysis of Frannie’s tragic history. It’s carefully researched with detail including literary and philosophical quotations, scientific beliefs and domestic details, and the reader will have no difficulties entering Frannie’s world. This is an absolute winner that deserves all the praise it is likely to attract.