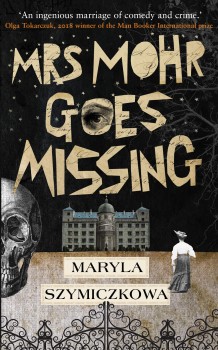 Ambitious social climber Zofia Turbotynska plans to arrange a charity raffle under the patronage of elderly rich women. Instead she conducts her own investigation into a suspicious death at Helcel House where they reside – but finds that nobody wants to listen to an inquisitive woman.

Cracow/Kraków, 1893. Zofia Turbotyńska is an extremely busy and well-off woman. Of course, it would be inconceivable for the 38-year-old to actually have a job, never mind a profession, yet she spends all her time running a perfect home, while compiling gossip about families, connections and intrigues to use information to delicately but effectively manipulate people to her advantage.
She might not appear to be a very likeable person. However, coming from relatively poor beginnings in a much more provincial town than her current city of residence, she’s desperate to find a place for herself in a patriarchal and patronising world. Zofia is married to medical professor Ignacy, whose career and social standing she has been steadily promoting, and she pours all her efforts into advancing her own position within a society that is full of ambitious aristocrats, bourgeois bigots and social climbers of all description.
And to that effect she hopes that organising a charity raffle and securing the patronage of elderly aristocratic women from Helcel House for the Poor, the newest and biggest charitable foundation, will assist her enormously.
Arranging such an event requires frequent visits to the house which is run by nuns and offers free lodgings to the poorest citizens, as well as rooms to the poorest citizens, as well as rooms to rich residents who can provide money and recommendations. As careful negotiations near a satisfactory conclusion, the elderly Mrs Mohr vanishes.
Zofia realises that she is bored to the back teeth, knows that her mind needs stimulation and sees her chance to investigate. She takes control of the situation in Helcel House, ignoring the worried pious nuns, and with help of her cook Franciszka manages to find the old woman, who has seemingly died of natural causes.
Soon a second woman disappears and this time it’s clear that victim has been murdered. Police get involved and quickly find a suspect who is immediately thrown in jail. Yet Zofia is convinced of the man’s innocence (and some hidden secrets), believing that the first death was also a murder. She pursues her own search for truth, pretending to be concerned about other trivial matters such as spicing up marital duties at home, choosing interesting food for dinners and cleaning graves ahead of All Saints’ Day, but keeps digging undercover. Not literally.
The book’s author Maryla Szymiczkowa is in fact a duo of Polish writers Jacek Dehnel and Piotr Tarczyński who clearly have been influenced by Agatha Christie and have created a unique charmed humorous world while additionally focusing on class issues and women’s rights, or lack of them. I have read most of the Polish literary canon from this era; however, it definitely takes a modern perspective to see these issues amplified in the current context.
The appearance of several real historical figures, whether in passing comments or in the background of events that occupy Zofia, adds to the authentic feel of what of course is the fictional atmosphere of Kraków at the time. I especially enjoyed the strong characterisation of the peculiar universe inhabited by diverse society.
The intricacies of the Polish language and the flowery flowing narration, beautifully translated by Antonia Lloyd-Jones, will appeal to anyone who enjoys an ingenious mystery featuring a larger than ordinary restricted life heroine, and an evocative feel of a turn-of-the-century country which did not exist on the political map of Europe, yet managed to thrive through various artistic and cultural areas.
Mrs Mohr Goes Missing might not be an edge-of-the-seat tense novel but it gives an excellent portrait of a woman who wants more from her structured life and who refuses to remain in the shadow of her husband while simultaneously pretending to be a part of it.