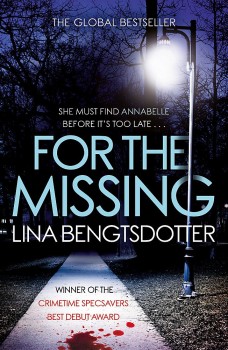 Detective Inspector Charlie Lager is sent from Stockholm to investigate the disappearance of teenager Annabelle in Gullspång. She dreads being back in her small home town, full of quiet despondence and ghosts from the dark past but must deal with the case and her own anxiety.

Seventeen-year-old Annabelle Roos had an argument with her ex-boyfriend and then disappeared on her way back from a party held in a disused building, a boarded-up village shop, but now notorious for gatherings fuelled by illegal substances and full of teenagers and young kids.

Her parents are out of their minds with worry, fearing kidnaping and murder, especially her overprotective mother Nora who becomes hysterical and unstable. Father Fredrik tries to keep it together but as the days pass and there is no sign of his daughter, he also starts to worry about Nora, particularly realising that he knows nothing of her childhood and teenage years.

As the local inexperienced police struggle with the pressure to find the girl and to manage the national media, Stockholm detective inspector Charlie Lager is tasked with taking over the investigation. Though reluctant to travel to Gullspång, her home town, she goes nevertheless, always the true female professional in a male-dominated world. Only on the way there does she admit to her colleague Anders that she hasn’t been there for about 20 years but refuses to divulge anything else.

The investigation is leading nowhere, focusing on pointless interviews and a belief that nobody living in the area would have hurt Annabelle, because everyone knows everyone. Well-read, intelligent and strong-willed, Annabelle was known as uninhibited and reckless, and her recent interest in religion had caused outrageous comments amongst both her friends and enemies. She was also seeing an older man.

Her final day is set out in short chapters throughout the book and this method of insight information increases the unsettling mood of the whole story. There are also quite disturbing recollections of two young girls interspersing the narration which eventually lead to an appalling event, sending shock waves into the future. As two timelines develop, we realise that some general characteristics of small-town Sweden such as young mothers, bad dental health and high unemployment have not changed in some places for three generations and there are no prospects for those who don’t move away. Charlie hopes that none of this will point to her past – her alcoholic mother and deprived childhood. But of course her role as the main investigator returning home cannot escape scrutiny and things become very difficult.

For the Missing, translated by Agnes Broomé, is a first-rate gripping and tense debut novel from Lina Bengtsdotter. The author confidently delivers the claustrophobic portrait of a neglected and hopeless small town, as well as a fully formed main protagonist Charlie, an independent ambitious woman, an excellent police officer, who is hiding dark secrets and using alcohol as self-medication to block memories and reduce anxiety, as one therapist had pointed out. Charlie rejects this idea and deals with her demons in own way. Bengtsdotter doesn’t judge Charlie’s actions, though some are reckless, but provides enough background to ensure that readers can decide how to approach this detective, new on the English scene.

The finale of the search for Annabelle appears to be less shocking than the initial premise which emphasises the overwhelming sadness regarding the social context of the novel. I am keen to read the next instalment of the series, For the Dead.