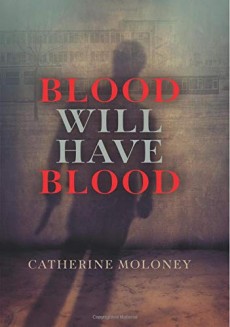 Blood Will Have Blood

A brutal murder occurs at the school where DI Markham's girlfriend works. In spite of criticism from his Chief Inspector, Markham insists on carrying out an investigation into the school staff.

A brutal murder occurs at the school where Olivia Mullen, DI Gilbert Markham's girlfriend, works. In spite of criticism from his Chief Inspector, Markham insists on carrying out an investigation into the school staff.

After a brief prologue designed to initiate the air of mystery that the novel seeks to achieve, we are presented with a meeting at Hope Academy and brief but telling descriptions of the staff. The Machiavellian head, James Palmer, tries to give an impression of democracy by asking to be called JP, but Olivia, a newly-arrived English teacher at the academy, is warned by her friend, Matthew Sullivan, not to trust him.

The power behind JP's throne is his HR manager, Tracey Roach, sycophantic and influence-seeking.  His PA, Audrey Burke, is honest enough, but helplessly and incomprehensibly in love with Palmer. The Deputy Head (Curriculum), Helen Kavanagh, has one ambition – to become Head herself and believes she knows how to get there. The other Deputy Head (Pastoral) is Dave Uttley, weak, unassertive, entirely the opposite of Kavanagh, and completely unfit for any senior post.

The man who stands out more than any other is the Assistant Head, Ashley Dean, known, on account of his exceptionally good looks, as ‘Dreamboat’. Remarkably, Dean had joined the school as a groundsman, had no academic qualifications whatsoever, but had, nevertheless, risen to a senior leadership position. In asking us to believe that such a meteoric rise could have been achieved by someone with no qualifications the author is asking quite a lot. She seeks to explain it by suggesting a homosexual relationship between Dean and Palmer.

This is not the only occasion in this novel where the reader is asked to accept what appears to be implausible. Olivia, sitting in a booth in a restaurant, manages to overhear a conversation that is so scandalous that, had it taken place at all, would have been whispered. Similarly, Markham overhears a conversation between Palmer and Kavanagh that provides him with vital information – something that would never have occurred if they had taken the simple precaution of closing the office door.

But if incidents in the plot appear forced, the chief investigating officer, Markham, shows characteristics that seem even more unlikely. He feels “a tingle at his finger ends”, based merely on the fact that someone cannot be found and is instantly aware that a tragedy has taken place. It is not entirely clear what causes a further instance of second sight but once again he heads directly for the scene of a murder.

These convenient examples of intuition give the impression of an author struggling with her plot. This is a pity because the characters on the whole are detailed, well-formed and believable, as is Markham himself, except for this over-developed intuition. The other query the reader is likely to have is the motivation for the murder. We are told that it stretched a long way into the past, but the rather uncertain psychological explanation offered fails to convince. It is difficult, for example, to believe that someone consumed with hatred would choose to avenge themselves in the way described.

Part of the difficulty one has in accepting this narrative is the fact that it is set in a school and that the murder actually takes place on the premises. Clearly the author, following the axiom to write about what you know, is at home in describing the everyday life in a school. But it is hardly the ideal location in which to set a murder mystery, particularly one of such a brutal nature, even if the school is “a soulless bunker” and “Stalin-esque”.