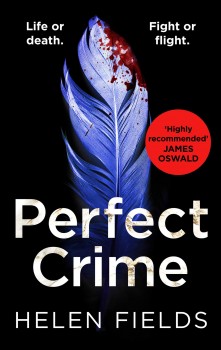 It seems that there is a serial killer at work in Edinburgh who is specifically targeting people who have attempted suicide and murdering them with sophisticated cruelty.

A young man is poised to jump from the barrier of the Queensferry Crossing over the River Forth, before he is successfully talked down by a skilled counsellor. Unfortunately, a few days later his body is found at the foot of a castle wall, apparently having finally succeeded in taking his own life.

Over the following weeks further bodies are found, each arranged as suicides but in circumstances that make it clear that the victims were actually murdered. In fact, the murders are elaborate, ritualistic and cruel.  All the victims have attempted suicide in previous weeks.

DI Luc Callanach, half-French, half Scots, now happily settled into life with the Edinburgh police, together with DCI Ava Turner, his boss but also the object of his strong affections, investigate the crimes until Callanach has to be suspended because of possible involvement in a murder, a crime which we, and the police, know he did not commit. This additional plot perfectly complements and interweaves with the main story line.

This book, the fifth in the series, continues to develop the relationships between the main protagonists and, as in all of the other books, their portrayal is engaging and interesting. Helen Fields has very skilfully created characters whose relationship is evolving and whose actions continue to interest the reader. The subplots of the relationships between the characters is witty and creatively portrayed and provides a very satisfying backdrop to the main plot.

The concept of a serial killer who is targeting would-be suicides is chilling. As we discover the identity of the killer and experience his mental state, I was reminded of Hannibal Lecter in Red Dragon.

As always, my pace of reading sped up as I approached the denouement and I was trapped, ignoring other tasks, until I reached the final page.