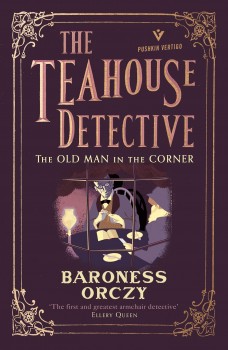 The Teahouse Detective: The Old Man in the Corner

A collection of short stories, each with a puzzle to solve.

Emma Magdolna Rozália Mária Jozefa Borbála Orczy de Orci, the Hungarian-born British novelist and playwright, is best known internationally for her series featuring the Scarlet Pimpernel, the alter ego of the handsome and wealthy English fop Sir Percy Blakeney, who rescues French aristocrats from the Revolution and who single-handedly launched the ‘hero with a secret identity’ sub-genre in popular culture.

Her parents, fearful of the threat of a peasant revolution, left their estate in 1868, and lived in Budapest, Brussels, and Paris, where Emma studied music. In 1880, the 14-year-old and her family moved to London, where the young Baroness attended the West London School of Art and Heatherley’s School of Fine Art. There she met a young illustrator named Montague MacLean Barstow, the son of an English clergyman. They married in 1894. They had little money and Orczy started to work with her husband as a translator and an illustrator.

In 1903, she and her husband wrote a play based on one of her short stories and submitted her novelisation of it to 12 publishers. It ran for four years, becoming one of the most popular shows in Britain, was translated and produced in other countries, and underwent several revivals. The theatrical success generated huge sales for the novel The Scarlet Pimpernel.
In 1908 she published a collection of short mysteries under the Teahouse Detective title. Very much of their time, the era is well evoked and sympathetically rendered.

Each story provides a puzzle that readers may enjoy trying to solve. Violence is involved in many, yet these remain gently, almost cosily, told tales with their reasoned deductions and carefully planted clues that keep fresh the interest in what are narratives from a bygone age which were mostly serialised in magazines in response to the success of Conan Doyle’s Sherlock Holmes stories.

Each is an exercise in deduction – and Orczy’s ‘detective’, a rather down-at-heel elderly gentleman habitue of one corner of an ABC teashop, with his emphasis on intelligence being brought to bear on investigation, may in some way have been a forerunner of Agatha Christie’s Poirot and his ‘little grey cells.’

The stories, of varying length, are told to young journalist Polly Burton of the Evening Observer, who becomes fascinated as the nondescript and eccentric man – he has all Holmes opinion of his own abilities as well as his waspish temperament – offers rational explanations for a series of major crimes involving murder, forgery, theft and deception which have baffled police in Britain and Ireland.

As weeks go by, she listens to him unravelling the trickiest and most notorious of crimes, but two questions remain in her mind: why does he habitually knot and unknot a length of string and just who is the old man in the corner? The facts and views he puts to her are as interesting as his detailed knowledge of the crimes is puzzling. Victims and villains are largely from the wealthier classes and portrayed as gentlemen.

In keeping with the era, women tend to be presented as adjuncts despite several playing important roles, and the testimony of the servant class is granted less weight than that of their employers. None of these mysteries is exactly baffling and in the old man’s descriptions appear so workmanlike that any policeman of modest intelligence and imagination should be able to solve them – hence his often expressed contempt for the forces of law and order and his unwillingness to cooperate with them.

The real hoo’ throughout is who is this stranger? In a denouement worthy of anything produced by Conan Doyle or Christie, Polly discovers just how much of his logical process of deduction she has absorbed and answers the vital question – just how long is a piece of string!

Orczy’s clever and always entertaining stories, a reminder that criminality went on in gentler times as well as in modern life, may not stretch the brainpower of crime aficionados too much, but they are still a superb example of their type and well worth a read.