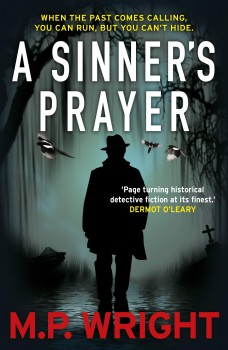 Against his better judgement, JT Ellington is lured back into the murky world of private investigation. But with a sizeable proportion of the bad guys in Bristol after him, even the resourceful JT might finally have met his match

A Sinner’s Prayer is the fourth and final book in MP Wright’s excellent series staring Bajan private investigator Joseph Tremaine Ellington – JT to his friends – who came to England with his police career in ruins after the death of his wife and daughter.

JT settled in my adopted hometown of Bristol, and set up as a PI, primarily helping out the black community in the St Pauls district. It was the Bristol connection that drew me to the books, but I stayed for the characters, primarily JT himself, but also his immensely shady cousin Vic, whose exploits play a large part in the series.

I started with Heartland and immersed myself in the very authentic feel of a time when racism was simply an uncomfortable fact of life that anyone of colour had to live with. It felt good to emerge from that time back to the present day, but now, in Brexit Britain and the rise of right-wing extremism, I feel like I’ve been forced back into the cesspit of a bygone age.

All Through the Night followed, with JT branching out into Somerset. I enjoyed the liberties his creator took with the underground world, and I was there with JT as he ventured beneath the earth. Then, in Restless Coffins, I took a trip across the Atlantic with him as he confronted the demons from his past.

After four years of floating from one dead end job to another, at the start of A Sinner’s Prayer JT is holding down in a menial job in a school as an assistant caretaker. It’s enough to put a roof over his head and enable him to take care of Chloe, his six-year-old adopted niece. Beyond that, there’s not much JT wants now other than a quiet life. But it seems that the world isn’t yet ready for JT to hang up his investigative skills, and the peace he’s worked hard to maintain quickly comes under threat.

When JT gets into a row over allowing a young girl to use the school’s lavatory, his employers seem only to happy to dispense with his services. So when he’s approached by Superintendent Fletcher and asked to look for a young man who’s gone missing, he’s not really in  position to refuse, something that Fletcher knows only too well and is happy to exploit. JT is drawn into a complex web of lies, danger and murder amongst the clubs and bars used by Bristol’s gay community

I approached A Sinner’s Prayer with a degree of trepidation, prepared to say goodbye to an old friend. But I needn’t have worried. The book is a fine farewell to JT and his extended family. The stakes are high, and with some very tense sequences that had me desperately itching to jump to the last page just so I could prepare myself for the worse. I did manage to resist that temptation, but it was touch and go. The tension ramps up as JT and Vic go head to head with some of the nastiest villains in Bristol.

The unpleasant underbelly of Bristol in the early 1970s is brought vividly to life, redolent of the era when it was socially acceptable to base a sitcom on the premise of a black family living next door. Scratch the surface and you find a city carved up by competing criminal empires, and if cousin Vic thinks a man is a bad ‘un, you can be certain that he’s very bad indeed. That’s amply demonstrated by the rapidly rising body count.

But amongst the stew of unpleasantness, JT stands out like a beacon of decency in a murky world, the sort of guy anyone would be happy to have fighting their corner. He’s intelligent, dependable and bloody tough. His cousin Vic is as hard as nails with all the morals of a rabid polecat, but when things really turn bad, he’s the sort of man you want with you, not against you.

The dialogue sparks like a firecracker, with Wright breaking every rule in the book about avoiding dialect and still coming up trumps. I read A Sinner’s Prayer hearing their voices in my head as plainly as if they were in the room with me. Wright brings a diverse cast vividly to life, and his look at Bristol in the not too distant past is one that will stay with you long after the action ends.