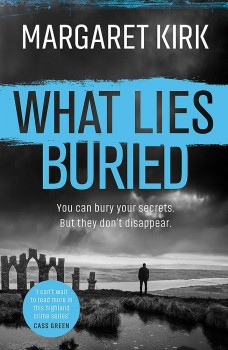 A ten-year-old girl disappears from a birthday party. Detective Inspector Lukas Mahler races against time to find her. But will her abductor stop at one child – and what is the connection with a murder from 70 years back?

Highland writer Margaret Kirk is back with another hard-hitting and dark case for her conflicted ex-Met detective Lukas Mahler.

Mahler has transferred to Police Scotland and is senior DI in Inverness, the capital of the Highlands. But even in the remote city on Scotland’s northeast coast, where the River Ness meets the Moray Firth, he is faced by equally horrendous crimes.

Now a bright modern city with an increasingly cosmopolitan population, it still has a darker side and despite an image of a peaceful backwater never quite comfortable with its bloodthirsty history, can still produce events more suited to its violent past.

The story opens with the discovery of a skeleton from 70 years back, linked to World War Two, on an estate being developed by one of the town’s most aggressive and politically well-connected entrepreneurs. Dog tags found in the grave, an old midden, establish the man’s identity. Could his murder be linked to a nearby POW camp, or is there a darker story?

Fascinating though the 1940s cold case may be, Mahler’s team face a far more urgent problem. A ten-year-old girl has disappeared from a birthday party. With no reliable witnesses and no leads, Mahler knows he is in a race against time to find her. The abduction sparks huge public interest.

Along with growing criticism of the lack of police progress and the further pressure this adds, a vigilante movement materialises – a throwback perhaps to the Highlands’ bloodier past. The messages these would-be avengers exchange on social media make for scary reading and as the case grows darker and the child’s body is found, they become even more determined.

Mix all this is with a second abduction, more than a hint of police corruption, plenty of in-force politics and references to the area’s superstitious past, the brutal suppression of its wise women and witches and you have near-perfect noir setting.

As well as complicated plotting and fine characterisation, Kirk’s greatest ability is to create atmosphere and the landscape for her stories. Inverness is brought to authentic life – including its often appalling weather – to make the reader feel they are experiencing it for themselves. This is a terrific follow-up to Shadow Man – and one to whet appetites for Mahler’s future cases.