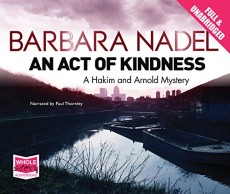 An Act of Kindness

The disappearance of a homeless man she’s befriended worries Nazreen Khan, then when he’s found dead, she turns to private investigator Mumtaz Hakim for help.

East London in the run-up to the Olympics is a strange mix of activity and apathy. The building works are huge but seem oddly divorced from the daily lives of its multicultural population.

The Arnold Detective Agency is struggling on, hand to mouth as usual, just providing a living for down-to-earth ex-soldier Lee Arnold and his Muslim assistant Mumtaz Hakim. Mumtaz has opened some doors for the agency with the Bangladeshi community amongst others, but she’s struggling with her own problems and is trying to extricate herself from the clutches of the notorious Sheikh clan who are determined to collect the debts her abusive husband owed them. She’s put her house up for sale but is determined not to sell to the Sheikhs at a knockdown price. Lee is worried about her, but she is an intensely private person and is resisting confiding in her friend and boss.

Another house figures largely in the book, too, a rundown property on Strone Road, owned by young couple Nasreen and Abdullah Khan. Abdullah is a successful lawyer and is determined to turn the house into a home for his wife, but his behaviour is strangely oppressive and Nasreen feels unable to confide in him when she finds a homeless man living in an old shed at the bottom of their very overgrown garden.

Nasreen befriends him and learns that John Sawyer was a soldier in Afghanistan, traumatised by his experiences and now just wants to hide away from the world. She takes him food and listens to him talk. He has concerns about her relationship with her husband who appears to have a jealous streak a mile wide and a huge sense of entitlement where his wife is concerned. She reminds him of the abused women he saw while on active service but he’s powerless to help. The worry is mutual as when John disappears, Nasreen is worried. When his dead body is found, Nasreen turns to Mumtaz for help.

An Act of Kindness is one of those rare stories that absolutely gripped me from the start and didn’t let go. Barbara Nadel’s evocation of east London’s melting pot of culture, race and religion is uncompromising and as sharp as the knives carried by so many of its inhabitants. Women are regarded as property by those on both sides of the cultural divide, from the likes of Sean and Marty Rogers, who could play the parts of Monty Python’s notorious Piranha brothers, famed for nailing heads to coffee tables and using sarcasm, to Abdullah Khan and his attitude to Nasreen.

The fact that she wants to have sex with him apparently diminishes her in his eyes and the idea of a woman who can think and act without needing his permission is an alien concept. The narration comes very strongly into play here, as when Abdullah opens his mouth, it’s immediately obvious that he’s Lancashire born and bred, which stands in stark contrast to his medieval views on women, which immediately brings all sorts of subtle prejudices and expectations into play.

Equally repellent is the way that Sean and Marty Rogers treat women. To them, women are simply a commodity to be traded to men for sex, and the side-story of Wendy, a woman who has been forced into prostitution and used in vile sex parties, is a hard one to listen to. The brothers are a gut-churning pair, and not above threatening Wendy’s daughter to bring their mother back into line when she’s seen as getting too close to one of the punters.

Nadel deftly adds fascinating historical and cultural detail into the story with Nasreen’s search for John’s killer, as the house appears to have strong connections with its Jewish former owner. Her ability to turn small info dumps and character conversations designed to convey information into something that I wanted to hear more of is an enviable skill. She gets into the minds of all of her characters and makes them real with a hundred small observations on how they think and feel.

The only misstep in the narration is the seamless way each scene segues into the next with no pause to let your mind process the change. This resulted in some entertaining and mildly irritating mental gymnastics to process the fact that there has been an invisible scene break. A couple of seconds would be enough, but Paul Thornley rarely pauses for breath in his otherwise excellent delivery.

The systemised abuse of women is hard to take, when coupled with the knowledge that it is absolutely real and only getting worse as attitudes amongst many of the Muslim community are turning back to an unappealing brand of fundamentalism. But as ever, that is balanced by the knowledge that white criminals are no better. It’s all abuse, however it’s dressed up.

There is light relief, though, and this usually comes from the delightfully potty mouth of fag-smoking no-nonsense copper DI Vi Collins, who can cut most people down to size with a nonchalant and perfectly pitched insult. Even Vi’s pompous boss Superintendent Paul Venus gets the chance to shine. But the honours all go to Vi Collins and her negotiations with the Rogers brothers were a masterclass in my favourite trope, antagonists working together.

This is an outstandingly good book that will make a lot of people very angry, just not all for the same reasons.