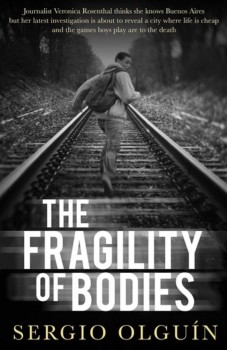 The Fragility of Bodies

A suicide alerts journalist Veronica Rosenthal to the number of deaths on the railways of Buenos Aires, and her research reveals that many of these fatalities are anything but accidental.

Magazine journalist Veronica Rosenthal is appreciated by Patricia, her boss, as someone who can ferret out stories from unpromising material and quickly produce copy to tight deadlines, so she is given wide latitude. A new line of investigation opens up when a man jumps to his death from a tall building. It emerges he was a train driver unable to cope with his feelings about people killed under his train.

Rosenthal makes contact with another train driver, Lucio, who takes her in his cab for a night shift. Both are horrified when the lights of the train reveal two boys standing side-by-side on the tracks, playing ‘chicken’. The strange emotions generated by the experiences that night impel Veronica to investigate, and to embark on a passionate relationship with Lucio.

A parallel story features two boys, Dientes and El Peque, friends from poor one-parent families. El Peque is spotted by Rivero, manager of the Spring Breezes youth soccer club, and invited to play. His selection owes more to lack of parental oversight and his combative nature rather than any great skill on the pitch, and Rivero soon offers El Peque a way to earn an attractive sum of money.

The two sides to the tale are soon brought together as Veronica gathers material for a series of articles. She is assisted by Federico, a young lawyer working in her father’s law firm, who is able to exploit her father’s national reputation and contacts in the judiciary and national police. Unfortunately, the man behind the terrible games being played on the railway tracks is also powerful, and has a wide range of corrupt businesses as well as a team of thugs prepared to damage or kill anyone who threatens their boss’s interests.

Rosenthal is a great protagonist, a fearless investigator with a great nose for a story and an intuitive instinct for the truth. In her personal life she is determined to please herself sexually and otherwise, and bounces through a series of affairs while her contemporaries in their 30s are mainly married with families. The relationship with Lucio, a married man, is difficult to rationalise but comes across as a natural response to the circumstances.

This is an excellent story, well told and translated, which sustains a high level of tension throughout. The reader is well aware of the risks to Veronica and those she co-opts in her research, and these culminate in violent and gripping action. In the background we have Buenos Aires, with great disparities of wealth and prevalent corruption, but a strong sense of life being lived to the full.