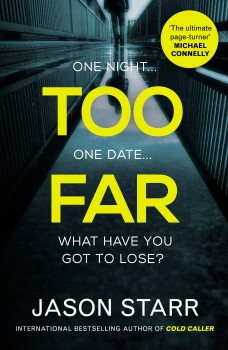 One flippant remark triggers a chain of events that sends Jack’s life spinning out of control.

Jack’s life has not turned out quite as he expected or hoped. He never made it as a guitarist, despite his talent, and he is now struggling as a middle-aged, unfulfilled real estate agent in Manhattan, with a cold fish for a wife and AA meetings as his only social life. The one star in his bleak sky is his son, Jonah.
Small wonder that Jack should be somewhat intrigued when an old college friend smugly extols the virtues of a website for married people looking to cheat on their partners. Years of a marriage lacking any passion or affection, let alone sex, nudges him towards the online site. If only he'd stopped there. Instead, he connects with ‘Fugitive Red’, and his increasingly steamy exchanges with the woman drive him to his next stupid hormone-inspired move, turning a bit of harmless flirtation into a night with deadly consequences.
Too Far is a pure-escapism crime novel, but it is also a story about how easily our lives unravel. One bad move, one poor introspection, no standing back to pause or reassess and we devastate our once dull existence.
I don't know if I've ever read a novel with a more infuriating protagonist than Jack Harper. If there's a wrong decision, an unwise action or a poor choice, it's his for the taking. I didn’t even particularly like Jack, because he doesn’t evolve from his early naivety, which in the end becomes irritating. Yet despite this and his foolhardiness that often left me with my bottom jaw dangling, he's a character I hoped would come out of his predicament in one piece.
The author handles Jack's mental health sensitively. In many thrillers, the protagonist bounces back from every setback but Jack, even in his naivety, slides downwards to that dark place where all seems hopeless. The book is written in the first person and with a believable protagonist’s voice, and the author grabs the reader by the hand and places them right in the story.
Maria, Jack’s wife, and Jonah are less developed, although we see enough interaction between Jack and his son to sense the affection. And we spend enough time with Maria and Jack to cringe at their love-dead marriage.
As Jack reels from one disaster to another, a zealous and wholly unpleasant police officer commands the reader’s time and attention. As much as Jack needs his face slapping, this antagonist is a policeman most would enjoy dragging through the streets by his hair or toenails. However, he provides a real hunter and hunted sense in this darkly intense and deeply unsettling psychological thriller. Although the reader has little contact with the college friend who is partially responsible for kick-starting Jack’s demise, he is another character with no redeeming features.

This story takes place primarily in Manhattan, and although there is not a huge amount of description, there is enough to provide a peer-into-the-nooks-and-crannies backdrop. The website and protagonist’s lifestyle put this story firmly into today.
Although there is a touch of the fantastical in this plot and I worked out the twist far too soon, Starr’s writing style, along with the intensity of pace and ever-increasing conflict, made this a fast and furious read.